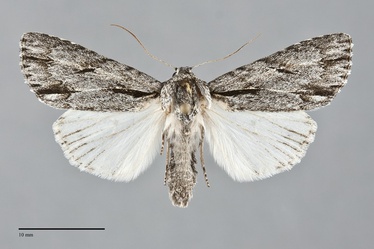 Acronicta strigulata is a medium-sized noctuid moth (FW length 17 - 19 mm) that flies in dry forest and riparian areas in dry steppe during the summer. It has a slightly streaky medium gray forewing marked with thick black basal, anal, and apical dashes and a golden yellow central thorax. The streaky appearance of the wing is due to lighter areas through the cell and fold, slightly darker veins on the costal and outer margins, long black triangles between veins at the terminal line, and the long dashes. The terminal line gives the impression that the distal wing has a sawtooth margin, but the actual contour is smooth. The transverse lines are gray, double, with lighter gray filling. The irregular antemedial line is evident anterior to the basal dash. The median line is visible as an oblique line anterior to the cell. The postmedial line is thin and evenly dentate, broadly convex around the reniform spot and bent on vein A1+A2 above the trailing margin. The subterminal line is very faint, light gray. The fringe is gray-brown, interrupted by the gray ground at each vein. The orbicular and reniform spots touch, but are faint except for a black line at the medial reniform spot. The reniform spot contains a small faint rusty brown color in most specimens. The claviform spot is absent. The hindwing and fringe are pure white with very faint gray discal spot, postmedial line as dark on a few of the veins, and a light gray terminal line. The head, collar, and tegulae match the gray color of the forewings, while the central thorax is golden yellow.

This species can be distinguished from all other Northwest moths by the gray forewing marked with black dashes in combination with a golden yellow central thorax. A closely similar species found in the southern Rocky Mountain region, Acronicta thoracica, has cream hindwings in males and gray hindwings in females, rather than white, as in both sexes of A. strigulata. Collectors along the southern border of our region should be on the lookout for this moth.

This species is found in riparian habitats along creeks and rivers at low elevations east of the Cascades, particularly near stands of cottonwood.  It is usually uncommon to rare, but may be locally common.

Acronicta strigulata is found east of the Cascade and Coast Mountains as far north as south-central British Columbia. It has been commonly collected in the foothill region along the northern Columbia Basin in Washington, but also occurs in southern Oregon and Idaho.

This species is found in western North America. The range extends from Colorado and New Mexico to coastal California south of our region.

No information is presently available regarding larval foodplants of this species, but it is suspected to feed on cottonwoods (Populus spp.) in the Salicaceae based upon the habitat.

Acronicta strigulata is primarily a species of late spring and early summer. It has been collected consistently from May to early August, but is most common in June and July. It is nocturnal and comes to lights.