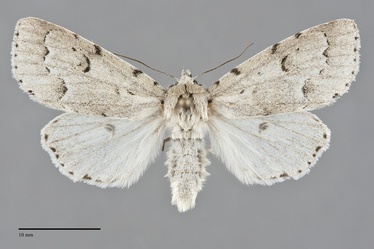 Acronicta innotata is the most yellow and broad-winged of three pale Acronicta species found in the Pacific Northwest. It is a medium to large-sized moth (FW length 16 - 23 mm) that flies in forests during the summer. It has whitish yellow-gray forewings marked with a white and black postmedial line, black spots on the costa, and a thin black reniform spots. The wing is relatively broad with a square apex and rounded anal angle. The ground color is putty to creamy white with a slight suffusion of darker gray but limited black speckling. A black spot at the wing base represents a short basal dash. The lines are mostly evident as black marks on the costa and a black mark on the trailing margin at the median line. The postmedial line is more complete, white with black lunules between the veins. It is drawn toward the base at the costa, is nearly straight across the wing from near the costa to the fold, often with a slight concavity toward the base opposite the cell, is sharply drawn toward the base on vein CuA1, and is nearly straight to the trailing margin except for a tooth on vein A1+A2. The subterminal line position is sometimes evident as an interface between the darker subterminal area and the lighter outer margin. The terminal line is a series of black dots between the veins. The fringe is white. The reniform spot is evident as a black curved line followed by a gray smudge, while the orbicular and claviform spots are absent. The hindwing is white with a pale gray discal spot and postmedial line, a terminal line consisting of black dots, and a white fringe. The head and thorax match the forewing color. The male antenna is filiform.

This species can usually be identified by is broad squared-off wing shape, cream color, black spot at the wing base, white and black postmedial line, and black spotted terminal lines on both wings. Acronicta vulpina is the most similar species in our area. It lacks yellow color, has a longer and more pointed wing shape, and has a longer basal dash than A. innotata.

This species is widely distributed in hardwood forests of eastern North America, extending westward through the Rocky Mountains in mixed hardwood-conifer forests and quaking aspen forests at middle elevations.

Acronicta innotata has an interesting distribution in the Northwest. It is found across the southern third of British Columbia and extends into the adjacent parts of northern Washington on both sides of the Cascades. It is absent from most of western Washington and the rest of the Cascades, but occurs in northwestern Oregon. It is also found in northern Idaho and in the Blue Mountains of Oregon and Washington.

The range of this species extends to the East Coast. It is not found south of the Pacific Northwest in western North America. The range extends to northern Alberta and then extends to the island of Newfoundland in a narrow north-south band near the Canada-United States border. Apparently, isolated records are found in the southern Appalachian Mountains to northern Georgia.

This species primarily feeds on Betulaceae and Salicaceae, and appears to favor birches (Betula spp.) and quaking aspen (Populus tremuloides).

This species is single brooded and has a long flight season in our area. It first appears in May and has been taken through the summer to August. Most specimens are from June and July. It is nocturnal and comes to lights.