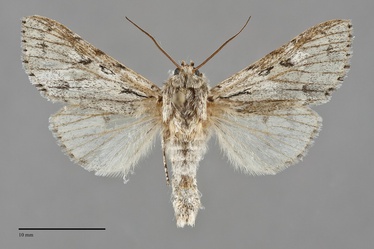 Acronicta lepusculina is most similar to Acronicta vulpina in our area, another pure white moth with powdery black markings. The black marks on A. vulpina are usually more extensive than those of A. lepusculina, but its basal dash is shorter.

This species is geographically variable and numerous names have been proposed for the many forms. Specimens from the Pacific Northwest are paler white than those from many other areas, including those from California which are gray and resemble Acronicta cyanescens.

This species is widely distributed throughout much of North America in riparian habitats along creeks and rivers at low elevations, and in quaking aspen forests at higher elevations in the mountains.

This species is found in forests in southern British Columbia and along rivers and streams in the dry interior of the Northwest. It is rare west of the Cascades but has been found occasionally in western Washington and Oregon.

The range of A. lepusculina extends across North America from Coast to Coast. The distribution in the East extend in a narrow north-south band near the Canada-United States border. It is more widely distributed in the mid-Continent and in the West where it occurs from north-central Alberta to Texas, Colorado, Utah, and California.

This species is a foodplant specialist feeding on Salicaceae including willows (Salix spp.), cottonwoods (Populus spp.), and quaking aspen (P. tremuloides).  It is also recorded from Betulaceae including birches (Betula spp.) and alders (Alnus spp.).

This species has been found from late spring to early fall in our region, most commonly in June and July. It is nocturnal and comes to lights.