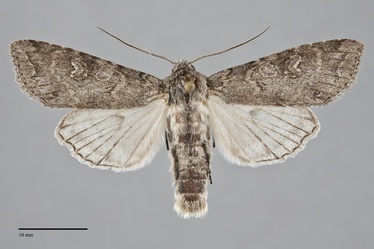 Polia discalis is a large (FW length 21 - 24 mm), light to medium-gray noctuid moth that occurs in the eastern parts of the Northwest. It has large forewing spots and a pale whitish hindwing. The forewing is relatively long and powdery, even, dull gray without a blue or brown tint. The costa is slightly darker than the rest of the wing. The basal, antemedial, and postmedial lines are dark gray, double, and filled with slightly lighter gray than the ground. The antemedial line is smoothly undulating. The postmedial line is slightly scalloped, drawn toward the base at the costa and parallel to the outer margin elsewhere. The dark gray median line is evident from the costa through the cell and faintly at the trailing margin but not on the mid-wing. The subterminal line is pale, thin, incomplete, offset below the costa and forming a weak W-mark on veins M3 and CuA1. It is preceded by a diffuse dark gray shade at the costa, opposite the cell, and in the fold. The terminal line is variable, from thin to a series of dark lunules. The fringe is gray. The orbicular spot is gray to black with filling of the ground color, large and round. The reniform spot is black with a pale gray inner line and central filling of the ground color, moderately large, and kidney-shaped. The claviform spot is dark gray to black, usually small and faint. The hindwing is whitish-gray with dark gray veins, dark gray thin terminal line, and paler gray discal spot and submarginal shade. The hindwing fringe is white. The head and thorax are powdery medium gray with a thin black gull-wing line across the mid collar and a weak tuft on the anterior thorax. The eye is covered with fine hairs. The male antenna is biserrate.

This species is similar to Polia piniae which replaces it west of the Continental Divide. Compared to P. piniae, P. discalis is duller gray without a blue tint and its hindwings are lighter colored. The number of signa on the bursa of the female genitalia differ in these species, two in P. discalis and four in P. piniae. Polia discalis also resembles Acronicta insita in size and color. Acronicta insita differs by having a sharply-defined postmedial line and by lacking the dark shade at the subterminal line of P. discalis. In addition, A. insita lacks hairs on the eyes.

Populations of P. discalis are geographically variable. Those from the central Rocky Mountains, including in the Wasatch Range of southeastern Idaho, are paler than those from elsewhere.

This species is widely distributed throughout the Rocky Mountain and Great Basin regions in forest and riparian habitats.

Polia discalis is restricted to south-eastern Idaho in the Pacific Northwest. It might also occur in southern Idaho near the Nevada border, western Montana, and eastern British Columbia based on its known occurrence in adjacent states and provinces. McCabe (1980) lists a record from Crowsnest Pass, Alberta, which is on the border with British Columbia.

This species is found predominantly in the Rocky Mountain region. It has been found east of the Divide in the northern portion of its range which extends from southern Alberta and Montana to the western Dakotas. Further south it is found in the Four Corner states as well as in north-eastern Nevada.

Larvae are known to feed on hardwoods such as willow (Salix spp.) in the Salicaceae.

Adults fly during the summer and have been collected in July and August in our region. They are nocturnal and come to lights.