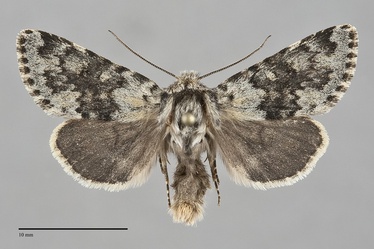 Lasionycta caesia is an attractive, light blue-gray and dark gray, medium-sized noctuid (FW length 13 - 16 mm) that flies near timberline in the mountains of western British Columbia and northern Washington. The forewing is charcoal-gray with extensive blue-gray and less ochre shading medial to the antemedial line, distal to the reniform spot in the median area, opposite the cell and in the fold in the subterminal area, and in the terminal area. The antemedial and postmedial lines are slightly darker gray and uneven. The postmedial line is strongly dentate. A dark gray median line is usually evident. The subterminal line is irregular. The fringe is checkered with gray and blue-gray. The spots are similar gray to the lines. The orbicular spot is small and round, but prominent due to filling of the blue-gray against the dark gray median area. The reniform spot is indistinct. The claviform spot is absent. The dorsal hindwing is very dark gray, with lighter scales proximal to the postmedial line, especially near the anal angle. The hindwing fringe is white, often with a slight yellow tint. The ventral hindwing is pale whitish-gray with dark basal suffusion, a black discal spot, and dark gray postmedial and marginal bands that give the hindwing a striped look. The veins are also dark, and the fringe is white. The head and collar are blue-gray, and the posterior thorax is darker gray. The eyes are covered with fine hairs. The male antenna is biserrate.

Lasionycta caesia flies with Lasionycta uniformis multicolor, a common high-elevation species, and the extremely rare Lasionycta gelida by its mottled blue-gray and dark gray forewings and dark gray hindwings. Similar specimens can be identified by the pattern of the ventral hindwing. Neither of the other species has a banded pale and dark pattern with dark veins.

This species is narrowly endemic to rocky alpine tundra above timberline in the northern Cascades of Washington and British Columbia.  It may be locally common in this restricted habitat.

Lasionycta caesia occurs in the high mountains near the Pacific Coast from northern Washington to north-western British Columbia.

Lasionycta caesia is a Pacific Northwest endemic and is not known from outside of our region.

This species is single-brooded and flies during the summer about a month after the snowmelt. Our records are from August.