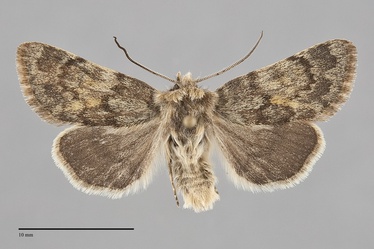 Lasionycta luteola is a common, small (FW length 13 - 15 mm), mottled gray noctuid that flies near timberline from northern Washington to southern Yukon Territory. It has reduced markings that include dark antemedial and postmedial lines and often luteous scales in the fold. The forewing ground color is usually slightly shiny medium dark gray, often darkest in the median area near the trailing margin and medial to the subterminal line, with variable light blue-gray scales. Ochre scales are most common in the fold, especially in the median and subterminal areas, but are often absent. The antemedial and postmedial lines are single, relatively wide, dark gray, and are similar in prominence to each other and the shade preceding the irregular subterminal line. The reniform spot is sometimes present as a patch of lighter or darker scales. The orbicular and claviform spots are absent. The fringe is weakly checkered with light and dark gray. The hindwing is dark gray, sometimes with lighter scales near the anal angle between the positions of the postmedial line and marginal band. The hindwing fringe is pale white or slightly yellow with a gray inner component. The ventral side of both wings demonstrate a wide diffuse gray postmedial line against a lighter gray background. The male antenna is biserrate.

This species can usually be recognized by its small size, limited forewing markings consisting of shades of gray and yellow and the lines bordering the median area, and the even wide postmedial lines on the ventral wings. Other Lasionycta species with which it occurs have well-defined forewing spots.

This species occurs at high elevations on alpine tundra near timberline.  It is common to abundant in this restricted habitat.

Lasionycta luteola is found from the northern Cascade Mountains in Washington north through British Columbia to southwestern Yukon Territory. It occurs east to the Alberta border.

Most of this species' range is encompassed by the province of British Columbia. It also occurs in the Rocky Mountains of western Alberta and in southern Yukon Territory.

Lasionycta luteola flies during the summer and are most commonly collected during July and early August. Adults are partly diurnal and visit flowers during the day. It is particularly fond of the flowers of moss campion (Silene acaulis) and is one of the moths that is most likely to be seen on this flower. Most of the flight is at night and this species is much more common in light traps than would be surmised by a daytime survey of its habitat.