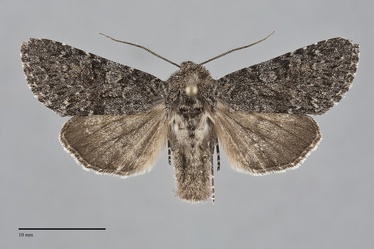 Lasionycta perplexa is a common, widely distributed, medium-sized noctuid moth (FW length 15 - 19 mm) that flies in montane conifer forests throughout our region. It has blue-gray forewings usually marked with a pale teardrop-shaped, irregular, or round orbicular spot. The forewing is slightly bluish-gray with a busy pattern of lines and spots, slightly darker in the median area due to a diffuse dark gray median line. The basal, antemedial, and postmedial lines are darker gray, double, and filled with the ground color or lighter gray. The antemedial line is zig-zagged on the veins. The postmedial line is dentate, sharply drawn toward the base at the costa, and obliqued toward the base below the top of the cell with an offset toward the base at the level of the inferior reniform spot. The subterminal line is usually a series of pale spots that is preceded by black wedges between the veins that are least dark at the costa. The orbicular spot is usually prominent, due to filling of whitish gray scales, often with a gray central ocellus. It is often teardrop or lemon-shaped, but can also be diamond-shaped or round. The reniform spot is kidney-shaped or weakly figure-eight shaped and is less prominent because it is filled with the ground color. The black claviform spot is variable in size, small to long and touching the postmedial line. The hindwing is medium-dark to dark brownish gray, darker gray toward the margin, with dark discal spot and postmedial line that are most evident in individuals with lighter ground color. The fringe is two-toned gray. The head and thorax are powdery gray with weak light and dark gray lines on the edges of the collar and tegulae. The male antenna is bipectinate with a long extension from both sides of each individual segment.

This species is nearly identical in color and pattern to Lasionycta perplexella, a species with which it flies in subalpine forests. Males of these species can easily be distinguished by examining the antennae. Those of L. perplexella are biserrate with triangular segments, not bipectinate as in L. perplexa. Lasionycta perplexa is slightly larger and usually has a larger and paler orbicular spot. Females of these species are very difficult to distinguish, although they can be differentiated by mitochondrial COI DNA sequencing (an advanced technique available only at a few universities). Lasionycta perplexa is also similar to Lasionycta subfuscula, another common and widespread species with which it flies in similar habitats. As with L. perplexella the males of these species are easily distinguished by their antennae. Those of L. subfuscula are broadly bipectinate and appear broad to the naked eye. Females are more difficult to separate. Those of L. subfuscula are less blue-gray and have a round orbicular spot with a central ocellus. They also differ in their COI DNA sequences.

This species is common and widely distributed in montane forest habitats throughout much of western North America.  In the Pacific Northwest, it is common but narrowly restricted to spruce-fir forests at high elevations in the Cascades.  However in the Rocky Mountain region, it is more widely distributed and often abundant in open ponderosa pine forests, mixed hardwood-conifer forests, and quaking aspen forests at middle elevations, as well as spruce-fir forests at high elevations.

Lasionycta perplexa is widely distributed in the forests of our region from the crests of the Coast and Cascade Ranges and east. It has not been found in the isolated mountain ranges in the Basin and Range province of southeastern Oregon or southern Idaho.

This species is predominantly distributed in the mountains of western North America, with a disjunct occurrence along the east shore of Hudson Bay in Quebec. It is found as far north as the vicinity of Anchorage, Alaska and extends south to New Mexico in the Rocky Mountains and the Sierra Nevada in California.

This species is known to feed on alders (Alnus spp.) in the Betulaceae.  In forest habitats without alders, it probably feeds on various other hardwoods.

Adults of L. perplexa fly during the summer and have been most commonly collected from late June to early August in our region. They are nocturnal and come to lights.