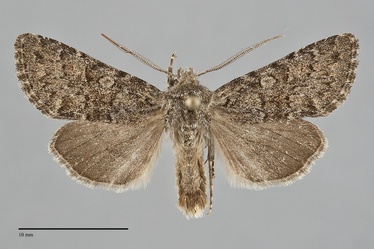 Lasionycta subfuscula is a common, lead-gray to silver-gray, medium-sized noctuid moth (FW length 15 - 18 mm) that flies in montane conifer forests throughout our region. The males have a wide, bipectinate antenna. The ground color of most specimens from our region are slightly mottled lead-gray; those from southern Idaho are silvery gray. The median area is slightly darker due to a diffuse gray median line; much darker in specimens from southern Idaho. The basal, antemedial, and postmedial lines are darker gray to black, double with filling of the ground color to whitish gray. The antemedial line is zig-zagged on the veins. The postmedial line is drawn sharply toward the wing base at the costa and is then obliqued toward the wing base from the top of the reniform spot to the trailing margin with a slight lateral convex portion opposite the reniform spot and a medial concave section posterior to the spot. The pale gray subterminal line is uneven and is preceded by a dark gray to black shade or series of wedge-shaped spots between the veins that are darkest opposite the cell and in the fold. The three spots are black. The orbicular spot is round or slightly oval and is filled with lighter gray and usually has a central gray ocellus. The reniform spot has a lighter inner gray line and is filled with the ground color centrally. The claviform spot is variable, usually small but occasionally spanning the median area to the postmedial line. The hindwing is dark brownish gray with barely perceptible dark discal spot. The head and thorax are powdery gray with light and dark edges to the collar and tegulae. The male antenna is broadly bipectinate, 5-6x as wide as the central shaft, and appears wide to the unaided eye.

This species is most likely to be confused with Lasionycta perplexa and Lasionycta perplexella in the Pacific Northwest. Both species are mottled blue-gray with similar lines and spots as L. subfuscula, but the males are easily distinguished because the antennae are much more narrow. Females are fairly difficult to separate, particularly from those of L. perplexa which are similar in size. In general, the orbicular spot of L. subfuscula is rounder and less pale than those of L. perplexa and the ground color is less bluish gray. These species differ in the orientation of the corpus bursae to the ductus bursae, slightly angled in L. subfuscula and straight in L. perplexa, and in the sequence of the COI gene of the mitochondrial DNA.

Two subspecies of L. subfuscula are recognized. The nominate subspecies occurs in the Rocky Mountains from southern Idaho and adjacent Wyoming to southern Utah and Colorado. A seemingly isolated from Steens Mountain, Harney County, Oregon is also assigned to this subspecies. Lasionycta s. subfuscula (Grote) is silvery gray with a contrasting darker median area. Subspecies L. s. livida Crabo and Lafontaine occurs in most of our area. It is darker lead-gray with less contrasting light and dark areas of the forewing.

Lasionycta subfuscula is found in forests throughout the Pacific Northwest as far north as Perkins Peak near Kleena Kleene, British Columbia. It occurs west of the Cascades Range and in the isolated ranges in the Basin and Range province.

The range of this species includes southwestern Alberta, but it is not generally distributed in the Canadian Rocky Mountains unlike L. perplexa and L. perplexella. Lasionycta subfuscula is also found in the central Rocky Mountains from Wyoming to the southern portions of Utah and Colorado. It has not been collected in California.

Lasionycta subfuscula is single-brooded and flies during the summer. Records from our region span mid-June to mid-August. It is nocturnal and comes to lights.