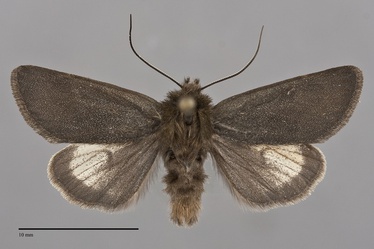 Lasionycta carolynae is a very rarely collected small moth (FW length 13 - 15 mm) from alpine habitats in Yukon Territory. It has unmarked slate gray forewings and white hindwings with dark gray basal suffusion, a thin discal spot, thin veins, and a thin, well-defined marginal band. The hindwing fringe is white. The head and thorax are slate-gray. The male antenna is biserrate.

This species is similar to Lasionycta lagganata and Lasionycta quadrilunata yukona. It differs from both species in the size of the hindwing discal spot on both sides. The spot is thin in L. carolynae and thick in both other species.

Lasionycta carolynae flies over scree slopes in rocky tundra. It is associated with shale in northern Yukon.

This species occurs in southern Yukon Territory within several miles of the border to British Columbia where it was collected by Peter Jakubek.

This species has been collected in late June and early July. The adults are diurnal and fly over rocky scree. They nectar on mountain avens (Dryas octopetala) and saxifrage (Saxifraga spp.) in northern and central Yukon Territory.