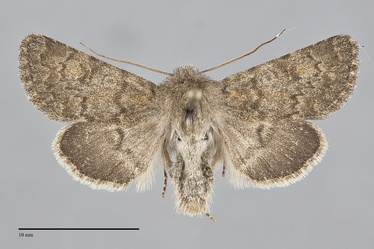 Lasionycta pulverea is a small (FW length 12 - 15 mm), gray-brown Lasionycta that flies in southwestern Alberta near the border with British Columbia. It has a pattern consisting of simple lines, an ocellate orbicular spot, and a two-toned hindwing with a chevron-shaped discal spot on both sides. The forewing is powdery slightly yellowish gray-brown, slightly darker gray-brown on the distal wing. The antemedial and postmedial lines are darker gray-brown and single. The antemedial line is smooth, except near the trailing margin. The postmedial line is scalloped, drawn toward the base at the costal margin, slightly convex around the reniform spot, and then oblique toward the base to the trailing margin. The pale, subterminal line is faint in most specimens. The orbicular and reniform spots are faint gray-brown. The orbicular spot is round or slightly oval, with filling of the ground color or slightly lighter scales, and a dark ocellus that is usually evident even in poorly marked specimens. The reniform spot is a vertical gray-brown smudge and the claviform spot is absent. The hindwing is pale yellowish or orange gray-brown with darker brown-gray thin chevron-shaped discal spot, postmedial line, and marginal band The fringe is two-toned with a light gray to yellow-gray base and whitish edge. The head and thorax are brown-gray. The eye is covered with fine hairs. The male antenna is bipectinate.

This species is similar to other brownish Lasionycta species, particularly Lasionycta promulsa and Lasionycta macleani. It can be distinguished from both of them by its two-toned dorsal hindwing with a thin chevron-shaped discal spot, two-toned with a thicker spot in L. macleani and more uniformly gray with a smaller spot in L. promulsa.

This species is narrowly endemic to the Rocky Mountains of Alberta in subalpine meadows at higher elevations where it may be locally common, but also occurs at lower elevations of the foothills in quaking aspen parklands.

This species has not been collected in the Pacific Northwest. It is likely to be found in the vicinity of Crowsnest Pass, British Columbia or in the mountains of western Montana or eastern Idaho.

Lasionycta pulverea is only known from the Rocky Mountain region of southwestern Alberta.

This species flies during the summer, usually in early and mid-July. It is nocturnal and comes to lights.