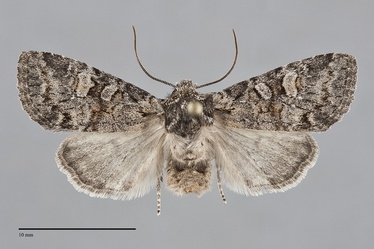 Brachylomia sierra is a small gray moth (FW length 12–14 mm) that flies in south-central Oregon during late summer. It has a short, forked basal dash, pale-filled black-rimmed forewing spots, and dark gray spots on both sides of the distal subterminal line. The forewing is slightly mottled medium-dark gray, slightly lighter at the base, in the distal subterminal area except on the costa, and at the apex. The costal subterminal area is darker gray. A short black basal dash is weakly forked apically. The basal, antemedial, and postmedial lines are gray, partially double filled with light gray, incomplete but strong on the costa. The antemedial line is usually visible on the mid-forewing. The median line is gray, diffuse, evident across the wing. The postmedial line is stronger than the other lines and has paler filling. It is weakly toothed on the veins, drawn sharply toward the base on the costa, nearly straight across the wing lateral to the reniform spot, and concave toward the base and slightly angled toward the outer margin below the spot. The subterminal line is light gray, widened to a small white spot at the anal angle, slightly irregular, preceded by dark gray on the costa and a small black spot in the fold and followed by a more diffuse gray spot in the posterior terminal area. The orbicular post is an upright or slightly slanted oval, outlined in black, often open at the anterior and posterior ends, filled with pale gray peripherally and the darker ground centrally. The reniform spot is moderate-sized, kidney-shaped, outlined in black, thickest medially, and filled like the orbicular spot or entirely with light gray. The claviform spot is absent. The hindwing is light gray, with slightly darker and ill-defined discal spot, postmedial line, and marginal bands. The hindwing fringe is two-toned light gray. The head and posterior thorax are powdery gray, with a light tan band across the basal collar followed by a black transverse line and a gray edge. The male antenna is bipectinate with longer anterior branches.

This species can be recognized by its small size, mottled gray forewing, short basal dash, pale-filled reniform spot, and black marks on both sides of the subterminal line near the anal angle. It flies with and is closely similar to Brachylomia obscurifascia superficially, although this species usually has more contrasting pale filling of the forewing lines. Males of these two species are best separated by examining the distal valves after removing the scales from the end of the abdomen with a fine brush. The digitus of B. sierra is not visible while that of B. obscurifascia protrudes far beyond the posterior edge of the distal valve. Brachylomia sierra is also similar to Brachylomia thula, found west of the crest of the Cascades, and Brachylomia discolor which occurs in southern Idaho. These species can be separated by locality.

Brachylomia sierra from southern Oregon and northern California and B. thula from west of the Cascades are closely related. These species are identical structurally and differ by only 1% in the sequence of the mitochondrial CO1 gene. We consider B. sierra to be a species rather than a subspecies of B. thula despite these similarities because of significant differences in the appearances of these moths as well as the fact that they prefer different habitats.

This species occurs in stream-side riparian habitats in dry forests of pine and fir. It has been found along a stream at mid-elevations in the Warner Mountains of south-central Oregon. Part of the type series was collected in a mid-elevation marsh. Dense willow scrub is present at both sites.

Brachylomia sierra is found in the Warner Mountains in Lake County, Oregon.

This species is also known from the northern Sierra Nevada in California.

No information is presently available regarding larval foodplants of this species, but it is probably a foodplant specialist feeding on willows (Salix spp.) in the Salicaceae based on the habitat association and closely related species.

The flight period of B. sierra is the fall. The type series and other examined specimens were collected during August. It is a nocturnal species that comes to lights.