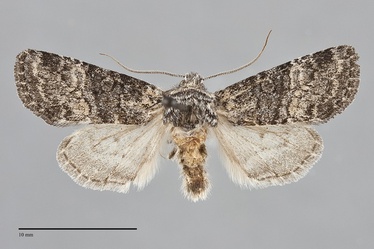 Brachylomia discolor is a small moth (FW length 12–13 mm) that flies in southern Idaho during late summer. It has a powdery, dark gray forewing with lighter whitish olive to ochre color on the posterior distal wing and has lighter scales in the reniform spot and the postmedial and subterminal lines. The distal forewing appears somewhat rounded. The ground color is even powdery dark gray due to a mixture of light-tipped dark scales and scattered lighter scales. The base, distal median area, and all but the costal subterminal area are powdery light olive-gray or ochre-gray. The basal, antemedial, and postmedial lines are dark gray. The antemedial and median lines are similar, nearly straight. The postmedial line is gray bordered laterally by a fairly wide light ochre or olive line. The inner gray component is weakly scalloped, the line is drawn sharply toward the base on the costa and is evenly curved and angled toward the base elsewhere, passing through the lower reniform spot. The subterminal line is pale ochre to olive, fairly wide and diffuse, preceded by slightly darker gray patches on both margins and followed by a similar dark patch in the posterior terminal area. The terminal line is a dark gray line interrupted at the veins. The fringe is gray with checkering of its base. The orbicular spot is round, outlined in black, and is filled with slightly lighter gray than the ground color peripherally and a central spot of the darker ground. The reniform spot is kidney-shaped, traversed by the postmedial line at its lower end, outlined in pale whitish scales and filled with the gray ground. The claviform spot is absent. The head and thorax are powdery gray with an olive to ochre base and mid-collar. A stout straight spine arises from the anterior foretibia. The male antenna is strongly biserrate, bordering on bipectinate.

Brachylomia discolor can usually be recognized by its small size, powdery gray color with lighter slightly yellowish or olive area below the reniform spot, round orbicular spot, and pale-rimmed reniform spot. It is similar to several other Brachylomia species in our area, but its range is only close to that of Brachylomia obscurifascia. The medial half of the wing is usually darker in B. discolor than in B. obscurifascia and its lines and spots are less well-defined. However, B. discolor can be separated easily from all other Brachylomia species by the presence of the spine on the tibia of the front leg, which is easily observed under moderate magnification.

This species is found in mid-elevation to high elevation forests with quaking aspen in the mountains of the Great Basin and Rocky Mountain region. It is common in the appropriate habitat.

Brachylomia discolor is found from southern Idaho west to the Warner Mountains of south-central Oregon in the Northwest. This is the northern limit of its distribution.

The range of B. discolor is centered in the Great Basin and southern Rocky Mountains. It is found east to southeastern Wyoming and central Colorado, south to eastern Arizona, and west to the Sierra Nevada where it has only been found in the vicinity of Tioga Pass.

No information is presently available regarding larval foodplants of this species, but it likely feeds on woody plants in the Salicaceae like other members of the genus. Quaking aspen (Populus tremuloides) or willows (Salix spp.) may be favored foodplants based on habitat associations in Idaho and Oregon.

This species flies in the late summer. It has been collected during August in the Northwest. The moth is nocturnal and comes to lights.