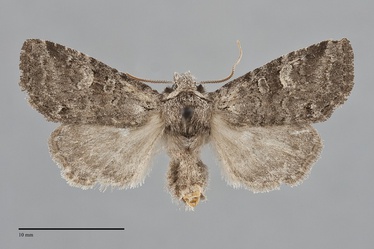 Brachylomia algens is a small, olive-gray moth (FW length 13–14 mm) that flies in northern and eastern British Columbia during the summer. Its forewings have a short forked basal dash, a black-rimmed orbicular spot, a pale-filled reniform spot, and a gray spot near the anal angle. The ground color is slightly mottled medium-dark olive-gray, lighter at the base, in the distal subterminal area except on the costa, and at the apex. The costal subterminal area is slightly darker gray. A short black basal dash is forked at the tip. The basal, antemedial, and postmedial lines are gray, partially double filled with light olive gray, incomplete but evident on the costa. The antemedial line is usually visible on the mid-wing. The median line is gray, absent or faint. The postmedial line is stronger than the other lines and has paler gray filling. It is weakly toothed on the veins, drawn sharply toward the base on the costa, nearly straight or slightly concave near the reniform spot, and concave toward the base and nearly perpendicular to the posterior margin below the spot. The subterminal line is light gray, slightly irregular, preceded by an ill-defined black spot in the fold. The orbicular post is an upright oval, outlined in black although often incompletely, filled with pale gray peripherally and the ground color centrally. The reniform spot is moderate-sized, kidney-shaped, outlined in black medially and partially or entirely filled with light gray. The claviform spot is absent. The hindwing is light gray, with slightly darker and ill-defined discal spot, postmedial line, and submarginal and marginal bands. The hindwing fringe is similarly light gray. The head and posterior thorax are powdery gray. The collar has a light tan base, a black transverse line, and a gray edge. The male antenna is bipectinate.

This can be recognized in its eastern and northern British Columbia range by its small size, dull olive-gray forewing color, short basal dash, pale-filled orbicular and reniform spots, and gray spot near the anal angle. It is superficially similar to Brachylomia thula which occurs west of the Cascade Range. These two species are amply distinct structurally, including in the width of the male antenna, which is more broadly bipectinate in B. algens. The only other Brachylomia species that occurs in the western range of B. algens is Brachylomia discinigra. Its forewing is divided into dark basal and light distal parts and is unlikely to be confused with B. algens.

This species is widely distributed across Canada, and may extend westward to the northern Rocky Mountain region in moist forest and riparian habitats.

Brachylomia algens is only known from eastern and far northern parts of British Columbia.

The range of this species extends from Yukon Territory and all of Alberta and Saskatchewan east to New Brunswick through southern Canada and the northern United States. The southern limit of its distribution is in Ohio in the East. It is also found in the Rocky Mountains in southern Wyoming and Colorado.

This species is a foodplant specialist feeding on cottonwoods (Populus spp.) and willows (Salix spp.) in the Salicaceae.

Brachylomia algens flies during the summer and early fall. It has been recorded from July, August, and September across the range of the species. It is nocturnal and comes to lights.