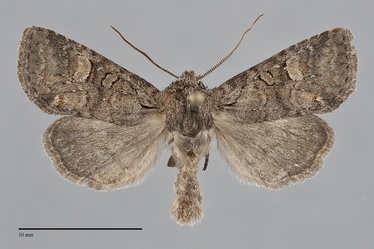 Brachylomia thula is a small, olive-gray moth (FW length 12–13 mm) that flies in the western part of the Northwest during the summer. It has a short forked basal dash, a black-rimmed orbicular spot, and a pale-filled reniform spot. The ground color is slightly mottled medium-dark olive-gray, lighter at the base, especially anterior to the basal dash, in the subterminal area except on the costa, and in the terminal area except near the anal angle. The costal subterminal area and posterior terminal area are slightly darker gray. Melanic specimens in which most of the wing are sooty dark gray exist. The black basal dash is forked at the tip. The basal, antemedial, and postmedial lines are gray, partially double filled with light olive gray or the ground color. The basal line is barely evident on the costa. The antemedial line is very faint, usually only evident on the costa and sometimes also on the mid-wing. The median line is gray, absent, or faintly visible on the posterior half of the wing. The postmedial line is faint, weakly toothed on the veins, drawn sharply toward the base on the costa, nearly straight or slightly concave near the reniform spot, slightly concave toward the base, and nearly perpendicular to the posterior margin below the spot. The subterminal line is light olive, variable in course from moderately irregular to nearly straight, preceded by a gray shade or ill-defined black spot in the fold. The orbicular post is an upright oval, usually angled toward the base anteriorly, outlined in black on the medial and lateral sides, filled with the ground color or light yellow or ochre scales peripherally and the ground color centrally. The reniform spot is moderately large, kidney-shaped, outlined in black medially and partially or entirely filled with dull light yellow or light olive. The claviform spot is absent. The hindwing is olive-gray, slightly darker toward the margin, with barely perceptible discal post and a dark thin terminal line. The hindwing fringe is white with a gray base or gray. The head and posterior thorax are olive-gray. The collar is variable, olive-gray with a black transverse line or light or vivid ochre yellow with a black transverse line and light to dark gray edge. The male antenna is asymmetrically bipectinate with long anterior and short posterior branches.

This species is very common in riparian habitats along creeks, rivers, and coastal wetlands, particularly near Pacific beaches, in low elevation mixed hardwood forests, and in rainforests of the Coast Range and along the west slope of the Cascades. It also occurs in boggy spruce forests at high elevations in the Cascades. Brachylomia thula is commonly found in dense willow thickets.

Brachylomia thula is found in the western part of the Pacific Northwest as far north as southwestern British Columbia. The distribution extends slightly east of the summit of the Cascade Range.

This moth has been recorded from northwestern California to the south of the Northwest region. Brachylomia thula is replaced by the similar species B. sierra is south-central Oregon and in the Sierra Nevada.

This species is a foodplant specialist feeding on willows (Salix spp.) and cottonwoods (Populus spp.) in the Salicaceae.

The flight season of B. thula is the summer. Pacific Northwest specimens have been collected from late June to early September. It is nocturnal and comes to lights.