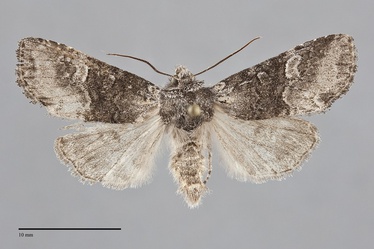 Brachylomia discinigra is a small to medium-sized, gray moth (FW length 14–15 mm) that flies in central British Columbia during late summer and early fall. It has a two-toned forewing that has a whitish to pale yellow reniform spot and is dark toward the proximal area and light toward the distal area. The forewing is powdery charcoal-gray from the antemedial area to the reniform spot and posterior postmedial line. The basal area and distal forewing are lighter gray, lightest in the subterminal area, except at the costa. A very small and weak basal dash is present. The distal veins are dark. The basal and antemedial lines are gray and double-filled with the ground color, often faint. The basal line is evident at the costa. The antemedial line is transversely oriented and is drawn basad at the veins. The median line is variable, faint to dark gray, slightly concave toward the base on the mid-wing. The postmedial line is toothed on the veins with black inner and gray outer components, drawn sharply toward the base on the costa, the segment lateral to the reniform spot is angled toward the base, and the segment below the reniform spot is concave toward the base. The subterminal line is pale, diffuse, sinuous, widest at the anal angle. The fringe is gray. The orbicular spot is round or slightly oval, outlined in gray and filled with light gray peripherally, lightest at the anterior end, and the ground color centrally. The reniform spot is kidney-shaped or heart-shaped, moderately large with the lower end cutting across the inner component of the postmedial line, filled with light gray or light yellow with a slightly darker center. No claviform spot is evident. The hindwing is light yellowish gray with gray suffusion that forms a weak discal spot, postmedial line, and submarginal band. A darker thin terminal line is present at the base of the two-toned gray fringe. The head and thorax are gray with a tan base on the fringe that is separated from the gray edge by a black transverse line. The male antenna is asymmetric, weakly pectinate anteriorly and serrate posteriorly.

This species can be recognized by its dark gray basal and light gray distal forewing with a large pale gray or pale yellow reniform spot. Other Brachylomia species are more uniform in darkness across the wing.

This species is widely distributed across Canada in moist forest and riparian habitats, extending westward to the northern Rocky Mountain region.

Brachylomia discinigra occurs in central and south-central British Columbia. It might also occur in western Montana based on its distribution in adjacent southwestern Alberta.

The range of this species extends east from central and southern Alberta. It is found in southern Canada and the northern United States to the St. Lawrence River mouth, New England, and New York. It also occurs in southwestern Wyoming and Colorado.

No information is presently available regarding larval foodplants of this species, but it probably feeds on cottonwoods (Populus spp.) and willows (Salix spp.) in the Salicaceae based upon closely related species.

This species flies during late summer and September. It is most commonly recorded from August and September across its entire range. It is nocturnal and comes to lights.