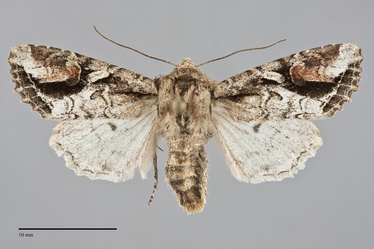 Egira rubrica is a common and widespread medium-sized (FW length 15 - 17 mm) light tan spring-flying moth that comes in two forms, with and without heavy black areas on the forewing. Its forewing has a black basal dash, a red-brown area in and next to the reniform spot, and its hindwing is pale. The most common form is light gray-tan, usually gradually darkening from the mid-wing to the subterminal line. The terminal area is pale putty at the apex and usually dark gray elsewhere but sometimes similar tan to the rest of the wing. The mid-wing distal to the reniform spot has a light reddish flush, occasionally dark red in brightly colored specimens. The mid-wing below vein M3 from the reniform spot to the subterminal line is gray to black in some specimens. A thin black basal dash is present. The transverse lines are double, dark gray on the costa and gray to tan elsewhere, filled with the ground color or slightly lighter tan. The antemedial line is typically very faint below the costa, slightly irregular and angled lateral. The median line is dark gray, usually visible on the costa and absent to fainter near the posterior margin. The postmedial line is usually faint, sharply drawn toward the base on the costa, weakly scalloped and excurved around the end of the cell, and absent, sinuous, or strongly scalloped below the reniform spot where it is angled toward the base. The subterminal line is pale yellow-tan, offset toward the base below the costa and then slightly excurved across the wing, preceded by a variable black shade, often limited to a thin line or couple of spots opposite the cell. The terminal line is absent or a series of gray chevrons between veins. The fringe is tan to red-brown, lightly to moderately checkered with gray. The orbicular spot is an oblique oval or narrow bar, tilted toward the base anteriorly, dark gray to black and often open anteriorly and posteriorly, filled with the ground color to light tan. The reniform spot is broadly kidney-shape or weakly hourglass-shaped, outline in gray to black medially and inferiorly and evident as peripheral light tan filling elsewhere, with red-brown central filling and dark gray at the lower end. The claviform spot is absent or faint gray filled with the ground color. The dark form is suffused with smoky gray on the wing base, in the cell medial to the reniform spot, and on the anterior subterminal area, and has a black mark from below the cell and M3 from the mid-median area to the black shade in the distal subterminal area. Some dark specimens have black in the cell and the black mark below the reniform spot but lack dusky shading elsewhere. Many dark specimens from west of the Cascades have lighter whitish tan filling of the orbicular spot, lower median area, and apex. The hindwing in all forms is tan off-white, often with gray-brown suffusion on the distal wing, slightly darker veins, a faint gray discal spot, incomplete gray postmedial line, and thin terminal line. The fringe is the hindwing ground color with a gray to light tan base. The head and thorax are tan, gray-tan, or reddish tan with a dark edge on the collar and lateral edges of the tegulae. The eye is covered with fine hairs. The male antenna is biserrate with a pure white scape (base).

This species can usually be recognized by its tan color, black basal dash, red-brown reniform spot and surrounding flush, and whitish hindwing. Light brown species of Orthosia which also fly during early spring have dark hindwings, lack a basal dash, and also lack the red-brown color in and near the reniform spot. The strongly marked form of E. rubrica is distinctive.

The type locality of the synonym Xylomiges mustelina Smith is Washington, Pullman.  Another synonym, Xylomiges pulchella Smith, was described from [British Columbia], Vancouver.

Egira rubrica is geographically variable in the Pacific Northwest. The populations from west of the Cascade Mountains are more colorful and tend to be more strongly mottled than those from east of the Cascades. Specimens that are heavily-marked with black are more common in the western part of the range.

This species is widely distributed in forest and riparian habitats throughout much of western North America.  In the Pacific Northwest, it is common to abundant in coastal rainforests, mixed hardwood forests, and riparian zones along creeks and rivers at low elevations west of the Cascades.  It is also common in mixed hardwood-conifer forests at middle elevations in the Cascades.  East of the Cascades, it is usually uncommon or rare in ponderosa pine forests and mixed hardwood-conifer forests of the Rocky Mountain region, and is most frequent in riparian zones along creeks.

Egira rubrica is widespread in the Pacific Northwest, occurring on both sides of the Cascade Range as far north as Vancouver Island and south-central British Columbia. The range extends into California west of the mountains. Records from east of the mountains have been found as far east as the Idaho Panhandle. The southern limit appear to be the Blue Mountains, with no records from southeastern Oregon or southern Idaho.

This species has a fairly wide distribution in western North America. The range includes southern Alberta to the east of our region. To the south it is widespread in California, as well as occurring further east to Colorado and Arizona.

This species is a foodplant generalist feeding on many kinds of hardwoods, including the families Betulaceae, Salicaceae, Rosaceae, and Rhamnaceae.

This species flies in the spring like other members of the genus. It has been collected from early March to early June, most commonly in April. It is a nocturnal moth that comes readily to lights.