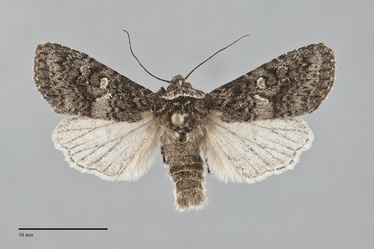 Egira dolosa is an early spring-flying medium-sized moth (FW length 15 - 18 mm) that flies in aspen or cottonwood forests. It has a mottled dull dark gray forewing that usually has a pale-filled round orbicular spot with an ocellus and a pale median area in the fold, less diffusely dark gray, and a pale hindwing. The forewing is more rounded than that of many species in the genus. It is mottled dull dark gray, sometimes diffuse charcoal gray. The lower median area is pale light gray, sometimes light ochre or olive, lightest in a quadrate patch on the mid-wing below the orbicular spot. The distal subterminal area and the terminal area are often lighter gray with a powdery look due to scattered dark gray scales and black veins. The basal, antemedial, and postmedial lines are dark gray, double with filling of the ground color or slightly lighter gray. The basal line is inconspicuous. The antemedial line is undulating, oriented perpendicular to the posterior margin, most evident adjacent to the pale median area. A dark median line is relatively faint, darkest on the costa but also evident as the lateral border of the light median patch. The postmedial line is scalloped, variable from barely visible to strong, often with a series of light spots and black lines on the veins along its lateral edge, strongly excurved around the end of the cell and slightly concave toward the base below the reniform spot. The subterminal line is pale gray, complete, nearly parallel to the outer margin. It is preceded by a black shade of spots between the veins beginning below the costa and increasing in size and darkness toward the posterior margin. The terminal line is thin, gray. The fringe is dark gray, weakly checkered. The orbicular spot is dark gray, round, filled with whitish gray and a dark ocellus, uncommonly only evident as a faint gray circle in very dark specimens. The reniform spot is fairly large, weakly hourglass-shaped, dark gray with light gray filling peripherally and gray to dark gray centrally and inferiorly. The claviform spot is absent. The hindwing is pale whitish gray with a slight sheen and a dusting of gray scales that is heaviest near the margin, a faint narrow discal spot, and a thin terminal line. The hindwing fringe is white. The head and base of the collar are dark gray, white the distal collar is silvery gray with a black edge. The rest of the thorax is dark gray with light medial edges on the tegulae. The eye is covered with fine hairs. The male antenna is biserrate.

This species can usually be identified by its early flight season, dark gray wing color, light orbicular spot and adjacent median area, and light edge on the collar. Other moths with similar dark gray color and whitish markings, such as members of the genera Melanchra, Papestra, and Hadena, fly later in the season.

This species is widely distributed across Canada in moist forest and riparian habitats.  In the Pacific Northwest, it is restricted to cottonwood forests in riparian habitats along creeks and rivers, and to quaking aspen forests.

Egira dolosa is widespread in southern and central British Columbia. Further south it is most common in the foothills surrounding the Columbia Basin and also occurs in eastern Oregon. It is uncommon west of the Cascades.

This species is found across the Continent in boreal forests. It is widespread in Canada, occurring from Northwest Territories to the Maritime Provinces. The range extends south to Ohio in the East and to Colorado in the West.

This species is a foodplant specialist feeding on cottonwoods (Populus spp.) and quaking aspen (P. tremuloides) in the Salicaceae.

This species flies during the spring. Records from the Northwest are from April and May. It is nocturnal and comes to lights.