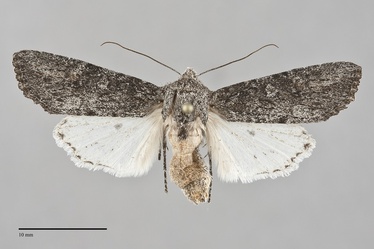 Egira curialis is an early spring-flying medium-sized moth (FW length 17 - 19 mm) that flies in grasslands and open forests. It has a long steel gray forewing with a slight reddish blush in the reniform spot and a pure white hindwing. The forewing is relatively long and narrow with a slightly pointed apex and mildly scalloped margin. The color is steel gray with a slight sheen, occasionally mottled with lighter gray on the wing base, in the posterior median area, and on the distal wing. The anterior wing is slightly darker medial to the postmedial line, most evident in mottled specimens. The median area distal to the reniform spot is often slightly reddish brown, similar to the filling of the reniform spot. The transverse lines are usually inconspicuous gray, with lighter gray components of the antemedial and postmedial lines outside the median area. When visible the antemedial line is slightly irregular and oriented perpendicular to the posterior margin. The postmedial line is scalloped, slightly S-shaped, excurved below the costa and slightly concave toward the base in the fold. The median line is diffuse dark gray, usually faint and evident near the costa or across the entire wing. The subterminal line is pale, very faint, minimally irregular and parallel to the outer margin, preceded by dark gray wedges across most of the wing except near the costa and trailing margin that are often the most prominent transverse marking. The orbicular spot is round, faint dark gray filled with light gray and often a central dark ocellus. The reniform spot is similar faint gray, often darker along the inferior edge, weakly hourglass-shaped, filled with pale rust and dark gray inferiorly. The claviform spot is variable, absent or dark gray. The hindwing, including the fringe, is pure white with a small gray discal spot, a postmedial line consisting of gray lines on the veins, and a terminal line of short gray lines between the veins. The head and thorax are even gray, with a slight median crest on the anterior thorax. The male antenna is biserrate with wide fasciculations.

This species can be distinguished from other early spring moths by its long gray wing with a row of dark gray spots near the outer margin and a rusty color to the reniform spot and adjacent median area, and a nearly pure white hindwing. It is unlikely to be confused with other moths in our area.

The type locality of the synonym Xylomiges candida Smith is [British Columbia], Vancouver. Xylomiges nicalis Smith, another synonym, was described from Washington, Pullman.

Larva is smooth, finely mottled with red, gray, and black, and with a broad red and white lateral band.  It is illustrated by Miller & Hammond (2003).

This species is widely distributed in forest and brushland habitats throughout much of western North America.  In the Pacific Northwest, it is common to abundant in dry ponderosa pine forests and juniper woodlands at middle elevations east of the Cascades, and in oak woodlands or mixed hardwood forests with oaks at low to middle elevations west of the Cascades.  It is frequent in mixed hardwood-conifer forests at higher elevations in the Cascades and Rocky Mountain regions, but is usually uncommon to rare in coastal rainforests west of the Cascades.  It shows a definite preference for drier habitats, especially grasslands.

Egira curialis is widely distributed in the Pacific Northwest. It is most common and widespread east of the Cascades where it occurs to south-central British Columbia. It is most common in western Oregon west of the Cascades, becoming more sporadic further north. Isolated populations occur in the south Puget Prairies, in the San Juan and Gulf Islands near the Gulf of Georgia, and on Vancouver Island.

This species is found in western North America. It is common throughout most of California and occurs east to Colorado and New Mexico.

This species flies in early spring, beginning as early as February and lasting through May. The peak of the flight is April. It is nocturnal and comes readily to lights.