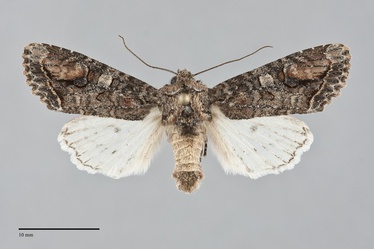 Egira perlubens is a common medium-sized (FW length 15 - 19 mm) spring flying moth that flies throughout much of the Northwest. It has dark gray forewings with a pale-gray filled orbicular spot, a red-brown patch in and distal to the reniform spot that is usually bordered posterior by a thick black line, and a white hindwing. The forewing has a scalloped outer margin. The ground color is mottled dark gray, brown-gray, or bronze-gray, darkest basal to the antemedial line and along the costa. The terminal area except at the apex is gray to dark gray. The posterior median area and a small patch at the apex are lightest gray. A red-brown flush fills the reniform spot and the area between the spot and the subterminal line, typically bordered inferiorly by a thick black line that is continuous with the inferior reniform spot. The basal, antemedial, and postmedial lines are dark gray, usually relatively inconspicuous and often incomplete. The basal line is evident on the costa. The antemedial line is sinuous, angled slightly toward the outer margin. The median line is dark gray, usually diffuse at the costa and thin and scalloped near the postmedial line below the reniform spot. The postmedial line is weakly scalloped, sharply drawn toward the base on the costa, excurved around the end of the cell when this portion is visible, and angled toward the base below the reniform spot. The subterminal line is pale yellow-tan, slightly offset toward the base below the costa and then sinuous across the wing. It is preceded by a thick brown, brown-black, or black shade from M1 to near the posterior margin. The terminal line is a series of black chevrons between the veins. The fringe is similar to the terminal area in color, weakly checkered. The orbicular spot is dark gray, round, filled with pale whitish gray to light gray, often with a gray central ocellus. The reniform spot is moderately large, broad kidney- or hourglass-shaped, mostly gray, often incomplete anteriorly and laterally and strong black inferiorly, filled with gray medially, dark gray inferiorly, and red-brown centrally and laterally. The claviform spot is small to moderate in size, black filled with the ground color. The hindwing, including the fringe, is pure white with faint gray discal spot, postmedial line that is evident as gray lines on the veins, and a thin terminal line that is interrupted by the white veins. The head and thorax are brown-gray with weak gray transverse line across the collar and along the edges of the tegulae, a pale tip on the collar, a weak median crest on the collar, and tufts of scales on the central thorax and anterior abdomen. The eye surface is covered with fine hairs. The male antenna is biserrate.

This species can usually be identified easily by its dark gray forewing with a whitish orbicular spot, large red-brown patch in the reniform spot and adjacent wing, a black mark formed by the lower reniform spot, a dark mark across the subterminal area, and a dark shade along the subterminal line that appear to curve toward the apex, and pure white hindwing. It is one of the largest Egira species in our area.

Larva is smooth, finely mottled in shades of red, gray, and black.  It is illustrated by Miller & Hammond (2003).

This species is widely distributed in forest and brushland habitats throughout much of western North America.  In the Pacific Northwest, it is most common in dry ponderosa pine forests east of the Cascades at middle elevations, and in oak woodlands and mixed hardwood forests at low elevations west of the Cascades.  It is usually rare in coastal rainforests and uncommon in mixed hardwood-conifer forests at higher elevations in the Cascades.  It appears to prefer drier habitats.

This species is widespread in the Northwest on both sides of the Cascades. The range extends north to Vancouver Island and south-central British Columbia and east to northern Idaho. It occurs south to the Blue Mountains in northeastern Oregon east of the Cascades, but does not appear to occur further south in southeastern Oregon or southern Idaho.

Egira perlubens is common throughout California. There are a few records from further east in Nevada and Arizona.

Adults are on the wing during the spring. Egira perlubens is usually the latest-flying Egira in our region, with stragglers through June. The flight begins in mid-March and peaks at the end of April. This species is nocturnal and comes to lights.