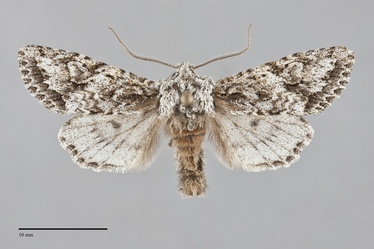 Egira februalis is an early spring-flying medium-sized moth (FW length 14 - 17 mm) that flies in western oak forests. Its has black mottling on its nearly white forewing, and its apical area is long. The ground color is whitish gray mottled and heavily dusted with dark gray to black. The terminal area is nearly solid dark gray except at the apex. Small patches of similar dark are present in the subterminal area in the fold and along the posterior margin in the median area. A diffuse black basal dash is present. The basal, antemedial, and postmedial lines are dark gray to black, double with filling of the nearly white ground color. The basal line is evident on the costa. The antemedial line is diffuse and difficult to follow except near the posterior margin, slightly irregular and oriented obliquely from anteromedial to posterolateral. The median line is variable in darkness, usually thick and dark near the costa and thinner and scalloped on the posterior wing, oblique from the costa to the medial reniform spot, then bent inward to run parallel to the postmedial line to the posterior margin. The postmedial line is incomplete, diffuse, and difficult to follow except on the posterior wing where it is scalloped and oblique toward the base below the reniform spot. The subterminal line is pale, nearly straight across the anterior wing below the apex, forms a weak W-mark on veins M3 and CuA1, and then concave toward the base to the posterior margin. It is preceded by several indistinct black spots between the veins near the apex, below M1 and M2, and in the fold. The terminal line is a row of small black dots between the veins. The fringe is strongly checkered light and dark gray. The orbicular spot is a large elongate oval, diffuse thin gray filled with the ground color and a gray spot at the medial end. The reniform spot is large, broad kidney-shaped, outlined in gray with a strong black inferior segment, filled with the ground color peripherally and diffuse gray centrally. The claviform spot is incompletely outlined in thin black and is filled with patchy gray. The hindwing is whitish gray with a slight sheen, evenly lightly dusted with dark gray scales, with gray veins that are darkest at the base and thickened to form a broken postmedial line, a diffuse ovoid discal spot, and a diffuse patchy terminal line. The hindwing fringe is whitish with a powdery gray basal row. The head and thorax are powdery light gray. Dark gray lines are present across the face, a V-shape across the median collar, and along the lateral edges of the tegulae. The thorax is sculpted, with a transverse ridge across the collar and a weak median crest. The surface of the eye is hairy. The male antenna is asymmetric, pectinate anteriorly and serrate posteriorly.

This species can be told from other spring-flying moths by its strongly mottled black and white appearance. It is similar in pattern to Egira cognata, but this species has a strong olive color that E. februalis lacks. The diffuse basal dash of E. februalis is lacking in E. cognata.

Larva is smooth, white with gray shading, small black spots, and yellow subdorsal streaks. It is illustrated by Miller & Hammond (2003).

This species is narrowly endemic to oak forests along the West Coast.  In the Pacific Northwest, it is common to abundant in oak savanna, oak woodlands, and mixed hardwood forests with oaks at low elevations west of the Cascades, and in oak woodlands at middle elevations along the east slope of the Cascades.  This species is considered to be management sensitive, depending on oaks as a larval foodplant.

Egira februalis is restricted to the western part of the Northwest, predominantly western Oregon but also the Columbia Gorge in southern Washington. The range extends to the east side of the Cascades near the Gorge.

The range of this species is limited to the West Coast of North America. It is found in western California as far south as the border with Mexico.

This species is a foodplant specialist feeding on deciduous oaks (Quercus spp.) in the Fagaceae.  In the Pacific Northwest, the primary larval foodplant is Oregon white oak (Q. garryana), but it may also feed on California black oak (Q. kelloggii).

This species has an early spring flight season, beginning in February and lasting through April. It is nocturnal and comes to lights.