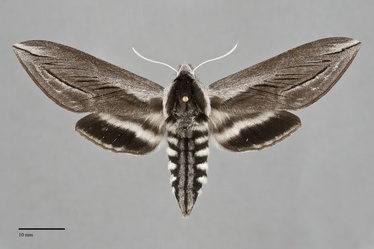 Sphinx vashti is a common, very large moth (FW length 32–37 mm) that flies in a variety of habitats during the spring and early summer. The forewing is long and pointed as in most sphinx moths. It is usually dark gray in the Pacific Northwest, lighter gray in the Great Plains, with lighter gray anterior base, apex, and terminal area and nearly sooty blackish gray posterior base. A series of longitudinal black dashes located between the veins extend obliquely from the lower median area to the apex. The subterminal line is black bordered laterally by whitish grays and is smoothly convex or weakly scalloped. The hindwings are small and ovoid. They are striped obliquely with whitish gray and black, usually with a thin light area between the broad black marginal band and the fringe. No spots are evident on either wing. The fringes of both wings are gray, sometimes checkered lighter gray on the hindwing. The thorax is variable, usually dark gray but occasionally lighter gray. The tegulae are black and dark gray medially, only evident in light specimens, and light gray adjacent to the wing bases. The dorsal abdomen is gray with a black median stripe, and the dorsolaterally portion is striped with black and silvery white on each segment. The antenna is whitish gray, club-like.

This species can be associated with the genus sphinx by its very large size, typical wing-shape, clubbed antenna, and pattern of gray, white, and black. It is most likely to be confused with Sphinx perelegans, but S. perelegans lacks the smooth component of the subterminal line of S. vashti. Sphinx vashti is larger than Sphinx sequoiae, a species that occurs near junipers in Oregon and that can be readily distinguished from S. vashti by its solid gray hindwing.

This common sphinx moth is found throughout the Pacific Northwest as far north as south-central British Columbia.  It does not occur in the most arid steppe habitats but is abundant in adjacent foothills and riparian areas.  It is uncommon in western Washington.

The range of this species extends east from the Northwest and central Alberta to Lake Michigan. The southern limits of its range are Oklahoma, northern Arizona, and southern California.

This species appears to be a foodplant specialist feeding on snowberry (Symphoricarpos spp.) in the Caprifoliaceae.

Adults have been collected from April through July in our area.  This species is nocturnal and comes to light.