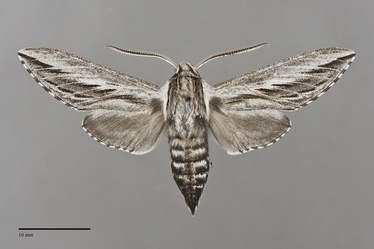 Sphinx dollii which enters our area in southern Idaho is our smallest member of the genus Sphinx (FW length 21–26 mm). The forewing is light gray to brown-gray, darkest along a black marks that extends from the posterior base to the apex. This mark is comprised of numerous transversely oriented lines giving the impression of the edge of a plume. A black and white segment of the subterminal line is usually present on the posterior half of the forewing. The fringe is checkered dark gray and white. The hindwing is medium gray to brownish gray with a faint diffuse postmedial line and a checkered gray and white fringe. The thorax matches the forewing color with dark gray stripes from the top of the head that extend posteriorly along the medial tegulae. The abdomen is barred with pale gray and black laterally and has a thin black dorsal stripe. The antenna is club-like.

This small Sphinx species is only likely to be confused with Sphinx sequoiae. The oblique forewing line is broken into several shorter segments in this species unlike that of S. dollii which extends continuously from base to apex.

This species is geographically variable. The Idaho populations are small and pale gray without any brown tint. The subterminal line is more distinct than in many other populations.

This species is common and widely distributed in dry juniper and pinyon pine woodlands at low to middle elevations. It is associated with open juniper forest in southern Idaho.

Sphinx dollii has only been found in south-eastern Idaho in the Pacific Northwest. It can be common in its limited range.

This sphinx moth occurs in southwestern United States and adjacent Mexico. Its range extends from west Texas and western Colorado to western Nevada and southeastern California.

This species is a foodplant specialist feeding on junipers (Juniperus spp.) in the Cupressaceae.

Adults are nocturnal and come to light.  This species flies during the summer, usually during late June and July in the Northwest.