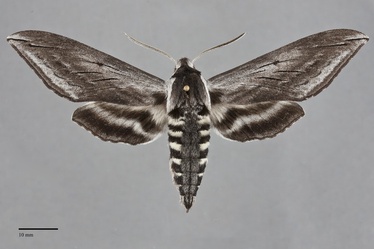 Sphinx perelegans is a very large moth (FW length 43–50 mm) that flies predominantly east of the Cascade Mountains during late spring and early summer. The forewing is dark charcoal gray without warm tints, with lighter gray in a diffuse area on the anterior portion basal half and in a stripe parallel to the margin in the subterminal area. Several longitudinal black streaks are present between the veins near the apex and on the mid-forewing, and similar but thinner lines are present in the cell. The subterminal line is indistinct, dark gray and waved. A several millimeter wide black band along the outer margin usually extends to the base of the fringe without an intervening lighter line. The discal spot is a dark gray smudge. The hindwing is banded whitish gray and black, with a checkered white and dark gray fringe. The thorax and top of the head are blackish gray, with lighter gray on the lateral tegulae near the wing bases and on the sides of the head. The abdomen is dark gray dorsally with black and white dorsolateral stripes on each segment. The club-like antenna is whitish gray.

This species is similar to several other species in the same genus but can usually be recognized by its dark gray color and lack of distinct subterminal marks. It is most similar to Sphinx vashti, but can be told from it rather easily by the subterminal line which is thick, straight, two-toned black and light gray in S. vashti andwavy and faint in S. perelegans. Sphinx perelegans is smaller than Sphinx chersis, a lighter gray species that has a light gray thorax with black lines on the tegulae rather than a dark central area. Sphinx perelegans is similar in size to Sphinx drupiferarum but is stockier and lacks the distinctive contrasting black-brown forewing with a pale gray costa of that species.

Sphinx perelegans is widespread in our area east of the Cascades, extending north to the border with British Columbia along the Okanogan River.  A few isolated records from the interior of British Columbia are limited to the Fraser River Canyon south of Lillooet.  It is less common west of the Cascades but is widespread in western Oregon and has been found on Vancouver Island.  It is common at the western and eastern borders of the Columbia Basin, in the Blue Mountains, and in the Warner Mountains of south-central Oregon. Records for Idaho are limited to the Panhandle and southeastern corner.

This species has a West Coast distribution.  South of the Pacific Northwest it is found in most of California except near the extreme eastern and southern borders.

Adults are on the wing from late May to early August in the Pacific Northwest.  They are nocturnal and come to light.