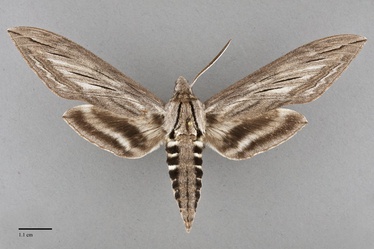 Sphinx chersis is our largest member of the genus Sphinx (FW length 53–58 mm).  The forewing is very long and slender in shape, with a pointed apex and weakly concave trailing margin. It is streaky light to medium gray, palest in the distal subterminal area lateral to a series of six long black dashes arranged from the lower median area to the apex. The transverse lines are gray, diffuse and partially incomplete except for the subterminal line. No discal spot is evident. The smaller ovoid hindwings are slightly brownish light gray banded with wide diffuse black bands. The fringes are gray. The thorax is light gray with black lines at the medial edges of the tegulae. The abdomen is gray dorsally and banded black and white dorsolaterally. The club-like antenna is black and white.

This species can be identified by its very large size, light gray color with forewing markings dominated by longitudinal black dashes, and the light gray thorax with black lines along the medial tegulae. The most similarly marked species in our area is Sphinx perelegans which is slightly smaller and more stout, with darker fore- and hindwings and thorax.

The larva is blue-green with broad black and white lateral stripes and a caudal horn. It is illustrated by Powell & Opler (2009).

This species lives in low elevation mixed hardwood forests and riparian habitats west of the Cascades.  It is relatively rare in the Willamette Valley, but becomes more common in southwestern Oregon.

Sphinx chersis has been found in the Willamette Valley region of western Oregon and in the Columbia Gorge.

This species is broadly distributed in North America north of Mexico except in the deep South, occurring to southern Canada from Nova Scotia to Alberta.  Tuttle (2007) notes the ubiquitous distribution of this moth in North America and surmises that a paucity of records from Nevada and Idaho might reflect undercollecting rather than true absence of the species from those states.  However, the Pacific Northwest data showing absence of this moth from the interior of our region suggest that the moth is most likely not found in the driest portions of the Great Basin.

The adults have been collected from April to September in the Pacific Northwest but are most frequent from May through July. They are nocturnal and come to light and flowers.