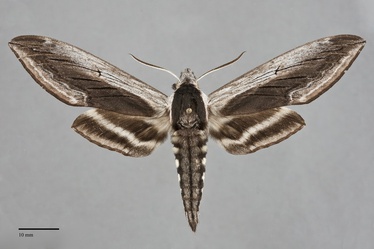 Sphinx drupiferarum is a very large (FW length 44–54 mm), gracile Sphinx species that flies in foothill and riparian habitats east of the Cascades during the summer. The forewing, blackish gray-brown in color, is very long and slender with a pointed apex. The forewing is two-toned, with a light gray costa and black-brown elsewhere except near the outer margin. The distal forewing is striped light gray and ochre with a dark brown fringe. Black dashes between the veins are thin and are less prominent that in some other Northwest Sphinx species, in part due to the dark color of the adjacent wing. Fine black lines are also present in the cell, and a thin transverse line marks the discal spot. The smaller ovoid hindwing is striped blackish-brownish and whitish gray, with a tan outer margin and brown fringe. The thorax is blackish-brown, light gray laterally near the forewing bases. The abdomen is brown gray dorsally with black and light gray stripes dorsolaterally. The whitish gray antenna is club-like.

This species can be distinguished from all other Pacific Northwest sphinx moths by the contrasting whitish gray and dark brown forewing.

This species is usually uncommon to rare. It is mostly found at lower elevations east of the Cascades in either foothill canyons or riparian habitats. It is sometimes found at higher elevations in mixed hardwood-conifer forests.

This is another widely distributed North American sphinx moth found from Coast to Coast. Its northern limit extends from the mouth of the St. Lawrence Seaway to southern British Columbia. It is not found in the deep south or in the extreme Southwest.

This species is a foodplant specialist feeding mostly on cherries (Prunus spp.) in the Rosaceae.

Sphinx drupiferarum is single brooded and is on the wing from mid-May to early August.  It is nocturnal and comes to light.