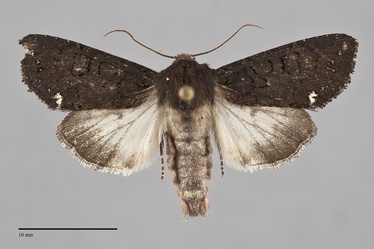 Melanchra assimilis is a nearly black medium-sized noctuid moth (FW length 16 mm) with forewings dominated by a "squiggly" white spot at the anal angle. The forewing, including the filling of the spots and fringe, is even brownish-black. The antemedial and postmedial lines are thin, single, and black. The antemedial line is mildly irregular and oriented straight across the wing. The postmedial line is evenly scalloped between veins, convex toward the outer margin around the reniform spot and then straight to the the trailing margin. The postmedial line is a series of small yellow dots preceded by black wedge-shaped marks between the veins except at the trailing margin where it forms a white to light yellow V-shaped or serpentine mark. The forewing spots are similar to the lines, thin and black without pale scales. The orbicular spot is oval, the reniform spot is kidney-shaped, and the claviform is a broad loop. The hindwing is pale whitish gray with a dark gray marginal band, fairly large discal spot, and veins. Its fringe is two-toned gray with an inner gray line, lighter whitish near the anal angle. The head and thorax are even dark brownish black. The eye surface is covered with fine hairs. The male antenna is bead-like.

This species should only be expected east of the Continental Divide and can be identified by its nearly black color and white tornal spot. Most other black moths lack the white subterminal spots. The most similar species is Melanchra pulverulenta, but this species tends to be lighter olive-gray with more distinctive black lines and spots. Its pale subterminal line is more complete, not limited to the posterior wing as in M. assimilis. The only other species with a similar pattern is Orthodes obscura, but it is dark reddish brown, not black, and its pale line is bordered by black unlike the white spots in M. assimilis. Dark species of Apamea, such as Apamea commoda, Apamea plutonia, and Apamea impulsa, lack hairs on the eyes and also lack the characteristic white mark at the anal angle.

This species occurs in a variety of forest and meadow habitats in eastern North America, although McCabe (1980) suggests that it is most common in bogs. It occurs on prairie remnants with aspen groves along the Peace River in British Columbia.

This species has only been found along the Peace River in the Pacific Northwest. This is near the border with Alberta in north-eastern British Columbia. McCabe (1980) also lists Idaho and Washington with the states where this species is found, but this is most likely due to misidentification of dark populations of M. pulverulenta that are found in the Northwest which resemble M. assimilis.

This species is more widely distributed in eastern North America. The range extends from the island of Newfoundland to Virginia in the east. Its distribution extends westward across the Prairie Provinces of Canada and the adjacent northern states to British Columbia.

This species appears to be a generalist. Covell (1984) lists a variety of ferns, forbs and broad-leaved woody shrubs and trees as foodplants.

Adults fly during the summer. The only Pacific Northwest records are from July, but it likely also flies earlier in June in our region.