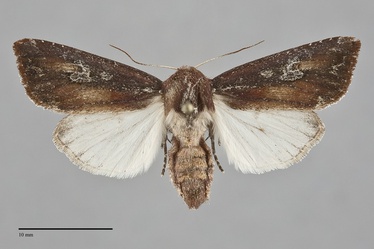 Melanchra picta, the "Zebra Caterpillar," is a red-brown, medium-sized moth (FW length 15 - 18 mm) that is vastly different in appearance than the other North American Melanchra species. It has white hindwings and apically pointed forewings bearing a large, diffuse, gray reniform spot. Most of the forewing is bright maroon with a light suffusion of light gray scales that produce a dusty appearance. The pale scales sometimes for lines on the basal veins and a dot at the base. The central portion of the wing is light olive to dark ochre, lightest in the region of the fold in the median area and between the reniform spot and subterminal line. Most of the transverse lines are absent or barely visible as light on or near the costal margin. The subterminal line is pale gray, diffuse but usually apparent across the width of the wing, and irregular in shape. The orbicular and reniform spots are similar, dark red and light gray and incompletely filled with light whitish gray scales. The orbicular spot is small and oval while the reniform spot is large and ovoid, usually with a slight lateral indentation and sometimes with the medial posterior corner drawn toward the base of the wing. The claviform spot is only present in a few specimens. When present it is thin, dark red with light gray center. The hindwing is white with a small amount of dark gray near the margin, strongest on the veins, a very faint gray discal spot, and a fringe that is red and gray anteriorly and white posteriorly. The head and body are maroon with dusty gray suffusion, often with a gray central and posterior thorax. The surface of the eye is covered with fine hairs. The male antenna is bead-like.

This species cannot be confused with other moths.  The combination of a slightly pointed forewing with smooth maroon color with olive to ochre on the central posterior portion, large gray reniform spot, and white hindwing are diagnostic. The most similar species is Sideridis maryx. It has a uniform maroon red forewing but lacks the yellowish patch and light spots and has a dark gray hindwing.

This species is widely distributed in open habitats throughout much of North America.  In the Pacific Northwest, it is usually rare outside of disturbed agricultural habitats, but may be abundant and a serious pest in herbaceous crops at low elevations east of the Cascades.  It is very rare west of the Cascades, but an unusual coastal population is found on the beach of the Pacific Ocean in Oregon.

Melanchra picta is found from southern British Columbia throughout the drier interior portions of Washington, Idaho, and Oregon. It has also been found in the San Juan Islands of northwestern Washington and along Oregon's Pacific Coast.

Melanchra picta is widely distributed in North America. It occurs across southern Canada from Coast to Coast. The range extends south to Virginia in the East, to the Texas Panhandle in the Great Plains, Colorado, Utah and Nevada in the Rocky Mountain and Great Basin regions, and California along the Pacific Coast.

This species is a very broad generalist feeding on many kinds of herbs and hardwoods in the families Asteraceae, Brassicaceae, Apiaceae, Fabaceae, Rosaceae, Ericaceae, and Salicaceae.  It is often a major pest in legume crops.  The local population on the beach along the Oregon coast feeds on searocket (Cakile edentula) in the Brassicaceae.  During high tide, the base of the plants are flooded by the ocean, and the larvae climb high on the plants to stay dry.

Melanchra picta has a long flight season. Records extend from late April to mid-September in our region. Phenogram peaks in May and early June and again in August suggest that it is double-brooded in our region. This species is nocturnal and comes to lights. Adults are often much less commonly collected than would be expected in areas where caterpillars are abundant suggesting that is comes poorly to light, although alternative explanations such as high rates of parasitism of the larvae could also account for this observation.

This species is a major agricultural pest feeding on many kinds of herbaceous crops in the Asteraceae, Brassicaceae, Apiaceae, Rosaceae, and Fabaceae.  In the Pacific Northwest, it is often a pest in crops of alfalfa (Medicago sativa) in the Fabaceae.