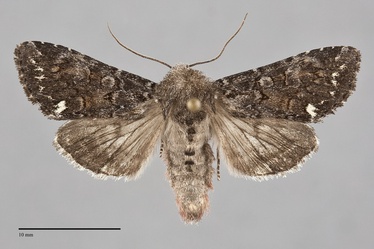 Melanchra pulverulenta is a dark olive-gray to dull black medium-sized moth (FW length 14 - 18 mm) that flies in wet forests during the summer. The forewing is mottled and powdery medium-dark to dark brownish-gray with a slight olive cast, lacking lighter or darker areas that are not associated with the lines or spots. The basal, antemedial, and postmedial lines are black, single or double, and filled with the ground color. They are inconspicuous against the darker background but add to the mottled appearance of the wing, as does the dark gray median line. The antemedial line is slightly irregular and slightly angled from medial at the costa to lateral posteriorly. The postmedial line is scalloped between the veins and excurved toward the outer margin around the reniform spot. The subterminal line is white to slightly luteous white, irregular and incomplete, strongest near the trailing margin where it forms a white spot. The fringe is concolorous with the terminal area. The orbicular and reniform spots are thin and black, moderately large, and filled with the ground color without pale scales. The orbicular spot is round to slightly oval and the reniform spot is broadly kidney-shaped. The claviform spot is black, usually thicker than the other spots, and relatively small. The hindwing is dull medium gray with darker gray marginal band, discal spot, postmedial line, and veins. Its fringe is lighter gray. The head and thorax are the even dark olive gray. The eye is covered in fine hairs. The male antenna is bead-like.

This species exhibits geographic variation in our region. Specimens from northern British Columbia are lighter olive-gray allowing the black pattern to show, similar to specimens from further east. The Pacific Northwest populations from further south and west are much darker which obscures the black elements of the pattern.

This species is widely distributed across Canada and throughout the Rocky Mountains in spruce-fir and mixed hardwood-conifer forests at middle to high elevations.  West of the Cascades, it occupies coastal rainforests in the Coast Range and along the west slope of the Cascades at low to middle elevations. It is usually a very rare species in most of the Northwest. Melanchra pulverulenta is considered to be management sensitive, and benefits from disturbed areas and small clear-cuts in the forest.

Melanchra pulverulenta is found in moist forests throughout our region, including west of the Coast and Cascade Ranges. It is most common at mid-elevations in the mountains. It has not been found in isolated mountains in the Basin and Range Province of southern Oregon and Idaho.

This species is widely distributed across boreal North America. It occurs from Alaska to Newfoundland in the North. The southern limits are New York in the East, Minnesota in the Midwest, Colorado in the Rocky Mountains, and California along the Pacific Coast.

This species appears to be a very broad generalist feeding on herbs, hardwoods, and conifers (Pinaceae).  It may prefer conifers, since there are many more feeding records from conifers including larch (Larix spp.), pines (Pinus spp.), spruces (Picea spp.), and Douglas fir (Pseudotsuga menziesii).

This species is on the wing during the summer, usually relatively early in the year. Records from the Pacific Northwest range are from June and July.