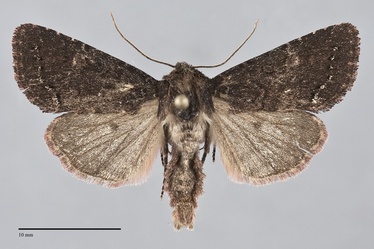 Orthodes obscura is a dark black-brown to red-brown, small to medium-sized moth (FW length 14 - 16 mm) that flies in forests north of northern Oregon during the summer. Its forewing has a pale, black subterminal line that is strongest on the posterior area. The color is even, slightly lighter and more reddish in the posterior median area in a few specimens. The basal, antemedial, and postmedial lines are usually absent, occasionally visible as slightly pale lines. The postmedial line is a series of paired inner black and outer pale slightly yellowish spots that are strongest near the trailing margin. A few specimens have a terminal line of pale spots on the vines. The fringe is similar to the rest of the forewing, very weakly checkered with lighter brown in a few specimens. The orbicular spot is black with filling of the ground, round or oval. The reniform spot is broad and kidney-shaped, black in outline with incomplete filling of similar light scales as the outer part of the subterminal line. There is no claviform spot. The hindwing is medium brown-gray with extensive dark gray suffusion, postmedial and submarginal lines, and a dark thin terminal line. The hindwing fringe is slightly paler gray, sometimes with a pink tint. The head and thorax are dark black-brown with lighter margin on the collar. The eye is hairy. The male antenna is bead-like.

This species resembles Melanchra pulverulenta and Melanchra assimilis in the tribe Hadenini. Both of these species have hairy eyes and a pale subterminal line on a dark ground; however, the subterminal line lacks the black inner component that is present in O. obscura.

This species is widely distributed across Canada in moist forest habitats, extending westward to the northern Rocky Mountain region.  In the Pacific Northwest, it is found in mixed hardwood-conifer forests at middle elevations.

This species is found in boreal and montane forests across North America. It is found as far east as southern Quebec. The range extends from central Alberta to Colorado in the Rocky Mountain region.

Adults fly relatively early in the summer and are often worn when found. They have been collected from late May to early July in the Northwest. This species is nocturnal and comes to lights.