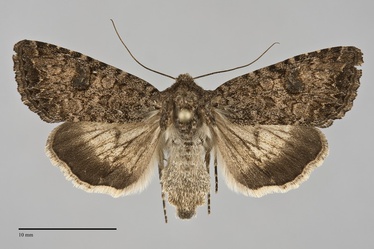 Anarta oregonica is a mottled, dull, dark brown, medium-sized moth (FW length 14 - 16 mm) that flies in high elevation forests during the summer. It has a dark reniform spot and a two-toned light brown and black hindwing. The dull brown forewing color is slightly darker along the costa and in the terminal area, sometimes dark brown-gray in the terminal area. The basal, antemedial, and postmedial lines are dark gray, double with filling of slightly lighter brown than the ground. The basal and antemedial lines are moderately irregular. The latter line is slightly slanted away from the base and slightly incurved at the posterior margin. The median line is dark gray, but usually faint except on the costa. The postmedial line is weakly to moderately scalloped, sometimes with thin pale lines on the veins near the tips of the teeth, drawn toward the base on the costa, gently and broadly excurved around the reniform spot, and bent to join the posterior margin at near a right angle. The subterminal line is pale ochre-brown, irregular with an offset toward the base below the costa and a strong W-mark on M3 and CuA1 to the outer margin. The line is preceded by dark gray to black marks on the costa and near the W-mark. The terminal line is a thin pale line at the base of the fringe and a series of dark gray spots between veins. The fringe is dark brown, sometimes weakly checkered. The orbicular and reniform spots are outlined in thin black. The orbicular spot is round, filled with the ground or slightly lighter brown and usually with a darker central ocellus. The reniform spot is moderately large, broadly kidney-shaped or weakly figure-eight-shaped, mostly filled with smudgy charcoal gray and a small amount of the ground color. The claviform spot is small, black, filled with the ground color or dark gray. The hindwing is pale tan with a moderately well-defined dark gray marginal band, a discal lunule, and veins. The hindwing fringe is light tan with a darker tan base. The head and thorax match the forewing, often with gray transverse bands on the collar. The eye is covered with fine hairs. The male antenna is bead-like.

This species closely resembles several other Anarta species, particularly Anarta alta and Anarta columbica. These species can be identified by habitat and subtle differences in color. Anarta oregonica is the most common of the dark brown Anarta species in forests in the Northwest, particularly in montane forests. Anarta columbica occurs in dry forests in central and southern British Columbia and in sage habitats in Washington and Oregon. It is slightly smaller than most A. oregonica and is grayer gray-brown with an identical pattern. Anarta alta is predominantly a Rocky Mountain species that barely enters eastern British Columbia. It is also lighter gray-brown than A. oregonica and tends to have a crisper pattern of lines and spots. Males can be distinguished by the shape of the clasper of the left valve, as long as the valve and gradually tapering in A. alta and shorter than the valve and slightly thicker in A. oregonica. Sympistis acheron and Sympistis glennyi fly with A. oregonica and are similar in size and color. These species have more clearly defined forewing lines and oval orbicular spots unlike those of A. oregonica. The eyes of these species lack hairs.

This species is widely distributed throughout much of western North America in coniferous forests, but extends into alpine meadows above timberline in the Rocky Mountains.  In the Pacific Northwest, it is moderately common in spruce-fir forests at high elevations along the summit of the Cascades and in the Rocky Mountains, and in open ponderosa pine forests at middle elevations east of the Cascades.

Anarta oregonica is widely distributed in montane forests throughout our region.

The range of this species extends south through the mountains to California, Utah, and Colorado.

Anarta oregonica is single-brooded and flies during the summer. It has been collected from mid-June through August in our region. This species is nocturnal and comes readily to lights.