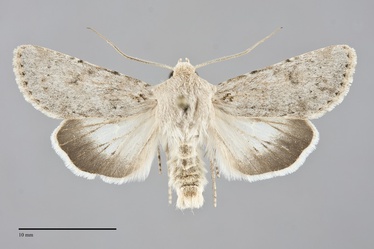 Anarta edwardsii is a medium-sized (FW length 15 - 17 mm) light gray moth that flies on ocean beaches and in salt marshes in our region. It has a white hindwing with a broad dark gray marginal band. The forewing is relatively long with a slightly pointed apex. The color is even powdery light brown gray. The transverse lines are nearly obsolete except at the costa and as a series of dots between the veins at the base of the fringe. The fringe is slightly lighter than the rest of the wing. The reniform is evident as a transverse darker gray lines. The hindwing is nearly white with a dark gray marginal band and dark veins. The hindwing fringe is white. The head and thorax match the wings. The eye is covered with fine hairs. The male antenna is beadlike.

This species can be identified by its Pacific beach habitat, powdery light gray forewing, and banded white and black hindwing.  It cannot be confused with any other moth in its ocean-side habitat.

Anarta edwardsii is listed as ENDANGERED in British Columbia by the Committee on the Status of Endangered Wildlife in Canada (COSEWIC).

This species is most closely associated with salt marshes in the Pacific Northwest, but is also collected on sand beaches. It is rarely collected but can be locally abundant where it occurs.

Anarta edwardsii is predominantly found near the Gulf of Georgia in our area, occurring both in southwestern British Columbia, in the San Juan Islands and along the Strait of Juan de Fuca in Washington. It has been found once in southwestern Oregon.

This species has a curious distribution in that it occurs in southern California outside of our area. It is possible that it occurs between these widely disjunct areas but the appropriate habitat has been poorly sampled.

This species is single-brooded and the adults fly during June and early July. It is nocturnal and comes to lights.