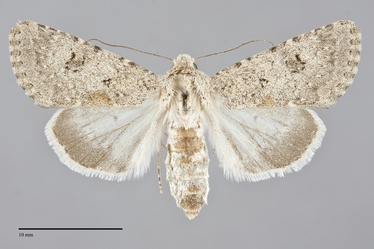 Anarta decepta is a small to medium-sized (FW length 14 - 16 mm) powdery, light gray moth that flies in steppe habitats during most of the year. It has a forewing pattern of thin black lines and spots and a white and gray hindwing. The forewing is most often light whitish clay, sometimes with a slight tan cast, with a powdery sprinkling of dark scales. The distal wing is slightly darker gray, especially the anterior subterminal area. The basal, antemedial and postmedial lines are gray, incompletely double filled with the ground color, strongest as paired dots on the costa. The antemedial line is faint below the costa, irregular and weakly excurved. The median line is gray, most commonly a spot on the costa and faint oblique line on the anterior wing and absent elsewhere. The postmedial line is moderately scalloped, sometimes with black veins at the tips of the teeth, smoothly excurved around the reniform spot and oblique toward the base from the lower end of the cell. The subterminal line is pale, vague and irregular, mostly evident as a transition from darker gray in the subterminal area to the lighter terminal area. It is preceded by a light gray shade that is darkest on the costa and opposite the cell. The terminal line is a series of small gray spots. The fringe is concolorous with the terminal area. The orbicular spot is usually absent, thin and oval when visible. The reniform spot is kidney-shaped, incompletely outlined in patchy black, filled with the ground color anteriorly and gray posteriorly. The claviform spot is variable, absent to small and black. The hindwing is white with an incomplete gray marginal band that is darker and wider in females, dark gray veins that are darkest at the expected position of the postmedial line, and a thin discal spot. The hindwing fringe is white. The head and thorax are uniform of the forewing color. The basal segment of the foretarsus has stout curved claw-like setae, largest distally. The eye is covered with fine hairs. The male antenna is filiform.

This species and Anarta antica are closely similar in superficial appearance and can be distinguished from other related species by the whitish gray forewing color with faint pattern of black lines and spots, light tan in other light species such as Anarta trifolii and Tridepia nova. Compared to A. antica, Anarta decepta tends to lack an orbicular spot and has irregular black spots at the periphery of the reniform spot, but these characters are unreliable for distinguishing them. They are best identified by examining the basal tarsal segment of the foreleg under magnification. Large curved tusk-like setae are present in A. decepta; only normal short "spines" in A. antica. The forewings of these species resemble those of Scotogramma submarina, a species that is restricted to southeastern Oregon in the Northwest. The hindwing of both Anarta species is much lighter than that of S. submarina.

Anarta decepta has been collected in the dry interior regions of the Pacific Northwest as far north as southern British Columbia. It occurs in the Columbia Basin, southeastern Oregon, and southern Idaho.

This species occurs from southern Alberta through the Great Plains to western Texas. It also occurs in the Great Basin and in eastern California.

Adults of A. decepta have a fairly long flight season and have been collected from the spring until fall. This suggests the presence of more than one brood. It is nocturnal and comes to lights.