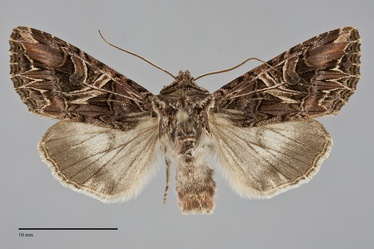 Anarta farnhami is an easily recognized red-brown, medium-sized moth (FW length 16 - 19 mm) that flies in boreal forest and at high elevations during the summer. It has a distinctive pattern of light lines on the median and distal forewing, including a toothed W-mark at the outer margin. The forewing is dark red-brown, darkest between veins in most of the median area. The central median area below the cell is pale ochre to light red-brown, matching the pale inner outline of the orbicular spot, following the contrasting dark veins laterally to the postmedial line. The subterminal area and apical terminal area are mottled red-brown and purple-brown, lightest, often ochre, in a streak below the apex and at the W-mark of the subterminal line. The basal line is black, double filled with ochre, broken by the cell. The antemedial line is dark gray to black, double filled with light red-brown, bent toward the base on the costa, irregular and nearly perpendicular to the wing to the trailing margin where it is toothed toward the outer margin below 1A+2A and then bent toward the base. The median line is dark, strong on the costa and near the posterior margin where it is dentate and runs close to the postmedial line. The postmedial line is similar to the antemedial line, sharply bent toward the base on the costa, concave towards the base across the end of the cell to M2, then finely scalloped and nearly straight, angled towards the base. The subterminal line is pale red-brown to ochre, irregular, offset toward the base near the apex, with a very strong and sharply toothed W-mark on M3 and CuA1. It is preceded by black lines and wedges between the veins near the costa and across the mid-wing where the wedges are largest near the W. A series of black triangles forms the terminal line. The fringe is purplish brown with light transverse lines at the ends of the veins. The orbicular spot is outlined in thin black and is filled peripherally with ochre or light red-brown and centrally with the darker ground color, an oblique ovoid or parallelogram. The reniform spot is thin black filled with purple-brown and a thin lighter brown crescent centrally, broadly kidney-shaped. The claviform spot is black, moderately large, apically pointed. The hindwing is slightly yellow pale gray-tan with a moderately well-defined brown-gray marginal band, veins, and narrow discal spot. The hindwing fringe is light gray-tan with a darker base. The head and thorax is mottled brown to red-brown with transverse lines across the collar and along the edges of the tegulae. The eye is covered with fine hairs. The male antenna is weakly bead-like.

This species is usually found at high elevations where it occurs in spruce-fir forests or subalpine meadows. It also occurs in alpine tundra above timberline in the Rocky Mountains. It is found at lower elevations in boreal forest habitats in central and northern British Columbia.

Anarta farnhami is widely distributed in forests and mountains throughout British Columbia. The range barely extends into the northern Cascade Mountains in Washington. It also occurs in the Idaho Panhandle.

The range of this species extends from Yukon Territory, northern Manitoba, and much of Alberta south in the Rocky Mountains to Utah, Colorado, and northern New Mexico. A seemingly isolated population flies in the high Sierra Nevada in California.

The adults are single-brooded and fly during the summer, usually in July and August. It occurs slightly earlier in June at lower elevations. It is nocturnal and comes to lights.