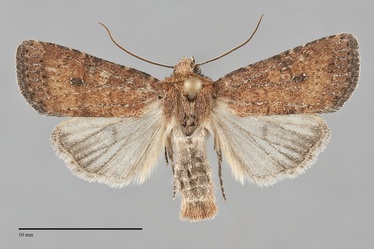 Homorthodes furfurata is a small, red-brown to orange-brown moth (FW length 11 - 13 mm) that flies in forests throughout our region during the summer. Its forewing has indistinct markings and a few small white spots around the lower reniform spot. The forewing is relatively narrow and rectangular. The color is nearly even powdery orange-tinted red-brown, slightly darker near the outer margin, with a few specimens darker reddish gray-brown. Some of the veins are dusted with light and dark scales. The basal, antemedial, and postmedial lines and the outlines of the spots are slightly darker red-brown. The double lines are filled with a light shade of the ground color. The basal and antemedial lines are most evident as the lighter filling. A darker gray to red-brown median line is present, faint to moderately dark. The postmedial line has an evenly toothed inner component, with slightly darker spots on the tips of the teeth. This line is gently excurved around the reniform spot and nearly perpendicular to the posterior margin below the spot. The subterminal line is similar pale to the filling of the other lines, thin and relatively faint. It is preceded by a red-brown to gray shade on the costa and across the mid-forewing, often condensed into a series of indistinct small spots. The terminal line is a series of gray spots, often faint. The fringe is slightly darker and grayer than the terminal area. The orbicular spot is very faint, small and circular, red-brown with a similarly-colored ocellus. The reniform spot is an upright bar or weak hourglass shape, outlined in red-brown with several small white spots along the periphery of the lower half, filled with the ground color anteriorly and gray posteriorly. The claviform spot is absent. The hindwing is pale gray with a slight sheen, slightly darker gray toward the margin with faint gray discal spot and veins. The hindwing fringe is pale whitish gray with a gray base. The head and thorax are the same color as the forewing ground, even. The eye is covered with fine hairs. The male antenna is filiform.

This species can usually be identified by its small size, narrow wings, and faint forewing markings except for the gray filling and white dots of the lower reniform spot. It is somewhat similar to Protorthodes rufula, a species that flies in western Oregon and Washington.  This moth has better-defined lines and spots than H. furfurata and tends to be slightly larger, with a forewing that is up to 15 mm. in length.

Homorthodes furfurata is widely distributed in forests in the Pacific Northwest. It is generally distributed east of the Cascade and Coast Mountains. The distribution west of these mountains is more restricted. It is common in the rain shadow of the Olympic Mountains in the Gulf of Georgia region and more generally in western Oregon.

This species is found across North America to southeastern Canada, Massachusetts, New York, and Mississippi. In the West it occurs south to California, Arizona, New Mexico, and Texas.

This species is single-brooded and flies during the summer. The flight season is relatively short, with almost all records from late-June to mid-August in the Northwest. It is nocturnal and comes to lights.