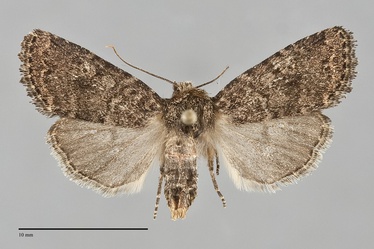 Homorthodes carneola is a rarely collected, small, dark gray-brown moth (FW length 12 mm) that flies in south-central British Columbia during the summer. Its forewing has a lighter-filled, round reniform spot and inconspicuous dark other markings. The forewing is relatively short with a slightly pointed apex for the genus. The ground color is even, dark gray-brown. The basal, antemedial, and postmedial lines are slight darker brown, double filled with a lighter shade of the ground color. The basal and antemedial lines are irregular, with the latter slightly convex toward the outer margin. The median line is gray, most evident on the anterior wing. The postmedial line is faint except on the costa and near the trailing margin, weakly toothed, sometimes with light and dark spots on the tips of the teeth on the mid-wing, drawn toward the base on the costa, weakly excurved around the reniform spot, and slightly angled toward the base below the spot. The subterminal line is pale ochre-brown to orange-brown, sinuous and preceded by dark gray to gray-brown spots between the veins on the costa and below the cell. The terminal line is a series of dark spots, sometimes joined by a dark line. The fringe is similar to the ground color, weakly checkered. The orbicular and reniform spots are weakly outlined in gray-brown. The orbicular spot is round, most evident due to gray-brown filling that is slightly lighter than the surrounding wing. The reniform spot is hourglass-shaped, often surrounded by a few small white dots, filled peripherally with the ground color and centrally with dark gray. No claviform spot is evident. The hindwing is slightly brownish gray with darker gray discal spot and veins and a thin terminal line. The hindwing fringe is gray with a striped yellow and gray base. The head and thorax are even dark brown. The eye is covered with fine hairs. The male antenna is filiform.

This uncommon species should only be expected in British Columbia and possibly also western Montana and eastern Idaho. It can be identified by the small size, dark brown color, pale round orbicular spot, and dark-filled reniform spot with small white spots around the periphery. It is unlikely to be confused with other Homorthodes species in the Northwest. It could potentially be confused with Orthodes noverca, a slightly larger but similarly colored species that is more widespread in our region. It has more distinct forewing markings, including a black outline of the inferior orbicular spot that H. carneola lacks. It also lacks the dark filling and pale spots of the reniform spot that H. carneola has.

This species occurs in forest habitats of the Rocky Mountain region.  It appears to be very rare and sporadic in the Pacific Northwest. It has been found in a dry riparian setting in mixed pine and Douglas fir forest near the Fraser River in southwestern British Columbia.

This species is only known from south-central British Columbia near the Fraser River near Williams Lake and Lillooet. It might be more widespread in the province but is rare.

Homorthodes carneola is distributed in the Rocky Mountains at least as far south as Colorado outside of our region.

The flight period of this moth is summer, with records from British Columbia in July. It is nocturnal and comes to lights.