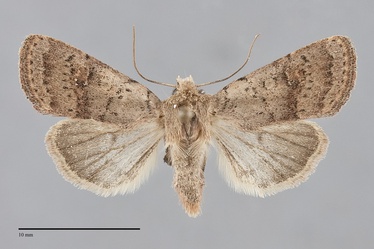 Homorthodes fractura is a small, gray-tan moth (FW length 10 - 13 mm) that occurs west of the Cascade Mountains and flies during the summer. It has multiple forms, with and without dark gray bands across the forewing. The color of the unmarked form is nearly even gray tan, often with a slight pink tint. The distal subterminal area is shaded with gray near the subterminal line. The terminal area is lightly dusted with gray, appearing lighter than the subterminal area. The basal, antemedial, and postmedial lines are gray to dark gray, double with ground-color filling. The portions of the antemedial and postmedial lines that abut the median area are much darker than the opposite component. The antemedial line is even and very slightly excurved, with strong teeth toward the base on the veins with a dark spot at the tip of each tooth. The median line is variable, weak and visible below the reniform spot to dark, wide, and extending across the entire wing. The basal component of the postmedial line is evenly and strongly toothed with the teeth crossing the outer line. The tips of the teeth are dark and the adjacent veins are light in specimens with gray suffusion in the subterminal area. This line is smoothly excurved near the reniform spot and curved to meet the posterior margin at a right angle below the spot. The subterminal line is a pale shade of the ground color, smooth and nearly parallel to the outer margin. It is preceded by an even gray shade. The terminal line is a series of gray spots. The fringe is the same color as the terminal area. The orbicular spot is variable, absent, a very faint gray circle or weak oval with or without a weak gray ocellus, sometimes evident as the ground color filling against a darker gray median area. The reniform spot is bar-like or weakly kidney-shaped, also faint gray sometimes with a few white scales along the posterior outline, filled with the ground color or faint red-brown and a dark gray spot in the lower third. The claviform spot is absent. The darker form has dark gray in the antemedial and subterminal area. The median and subterminal areas are lighter gray. The hindwing if gray-brown with a slight sheen, gradually darker gray toward the margin, with gray discal spot and veins. The hindwing fringe is yellow to orange off-white with a gray base. The head and thorax match the forewing ground color without dark markings. The eye is covered with fine hairs. The male antenna is bead-like.

The form of this species with dark gray basal and distal wing, or with a very dark median line, are easily identified by this feature in combination with the gray-tan ground color and small size. The unmarked form is similar to Homorthodes communis, a more common and widespread moth in our area. Homorthodes fractura is the grayer of the two west of the mountains and often has a pink tint, whereas H. communis is orange. Homorthodes communis lacks red-brown in the reniform spot and has lighter gray lines with less prominent teeth, especially on the antemedial line. Males of these species can be differentiated by the shapes of the distal valves, visible under magnification after removing the scales from them with a small brush. Both are bent ventrad distally. Homorthodes fractura has a "knobby" bend and a wide neck at the base of the cuculllus, while H. communis has a smooth bend and a narrow neck.

This species is mostly limited to coastal rainforests and mixed hardwood forests at low to middle elevations west of the Cascades.  It is common to abundant in this restricted habitat. It is uncommon in dry forests east of the mountains.

This is a West Coast species that occurs south to Baja California. Isolated records are shown for Arizona and southwestern New Mexico on the Moth Photographers Group site.

No information is presently available regarding larval foodplants of this species, but it probably feeds on hardwoods such as alders (Alnus spp.) in the Betulaceae based upon closely related species.

The adults of H. fractura appear in the late spring at the earliest and have been collected to early September. They are most commonly found in July, a few weeks earlier than H. communis.