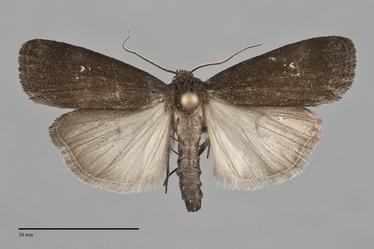 Proxenus miranda is a small noctuid moth (FW length 11 - 14 mm) with a satiny dark gray to black forewing marked with pale whitish scales at the outline of the reniform spot and lacking all other markings. This species is easily rubbed and is difficult to find and maintain in pristine condition. The hindwing is smoky gray with a slight sheen, lighter at the base and gradually darkening toward the outer margin. The discal spot is darker gray and the fringe is the same shade as the adjacent wing. The head and thorax are dark gray like the forewing. The male antenna is weakly beaded.

Our other Proxenus species are paler gray that P. miranda. A tiger moth that occurs in southern Idaho, Hypoprepia inculta, is similar in size and color. In addition to structural differences like trifid hindwing venation in Proxenus and quadrifid venation in the family Erebidae, these species can usually be identified by a pale cubital vein in H. inculta that is lacking in P. miranda.

This species is common and widely distributed throughout much of North America in moist, open forests and grasslands.  In the Pacific Northwest, it is common in coastal rainforests, oak woodlands, mixed hardwood forests, and open grasslands at low elevations west of the Cascades, in agricultural areas and urban areas both east and west of the Cascades, and in open, moist mixed hardwood-conifer forests of the Rocky Mountain region.

This species is widely distributed in North America. The western North American populations extend south through California to Arizona and in the Rocky Mountains to Colorado. The range extends east from our area across southern Canada. In the East it is found from southern Canada to South Carolina, Tennessee, and Texas.

This species is a generalist feeding on many kinds of herbaceous vegetation.

Proxenus miranda is single brooded and the adults fly from late spring to August in our area. It is nocturnal and comes to lights.