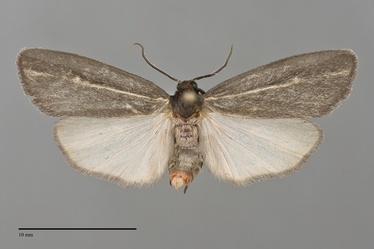 Hypoprepia inculta is a small to medium-sized (FW length 13–16 mm) gray tiger moth known only from the southeastern portion of the Pacific Northwest. The forewing is dull, dark gray with lighter cubital vein and discal spot. The hindwing is pale whitish gray with a slight pink tint, darker anteriorly and at the margin. The head and thorax are dark gray like the forewings. The abdomen is lighter gray with an orange or pink tip.  The male antenna is biserrate.

Hypoprepia inculta flies in bunchgrass steppe in the Central Basin and Range and eastern Snake River Ecoregions in the Pacific Northwest.


H. inculta is only known from southeastern Idaho in the Pacific Northwest.

This species occurs in the Rocky Mountain states from the Mexico border north to southern Wyoming and the Black Hills of South Dakota.

No information is available for this species.

The Pacific Northwest records for this species are from mid-July to late August. It is nocturnal and comes to light.