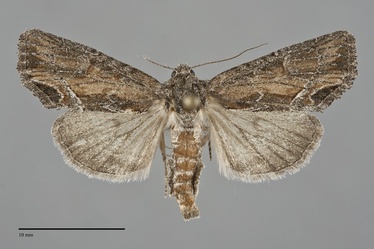 Photedes didonea is a small to medium-sized moth (FW length 14–16 mm) that flies in dry steppe habitats during late summer and fall. It has a pale, orange-tan and gray forewing marked with a median bar, a crisply-defined oblique black and white posterior postmedial line, and a gray patch in the posterior terminal area. The outer margin of the forewing is angled at vein CuA1 such that even worn specimens can be identified by this feature. The color is washed-out gray around the margins and dull orange-tan on the mid-wing from the base to the W-mark of the subterminal line that reaches the outer margin. A black line spans the median area in the fold. A more diffuse dark gray area is present along the base of the posterior margin. The terminal area is gray, contrasting dark gray posteriorly between the W-mark and the anal angle. The basal and antemedial lines are incomplete, gray, double, and are filled with the color of the adjacent wing. The antemedial line is evident as an angle near the fold and as spots on the costa. The postmedial line is very faint anterior to the fold, evident as the pale gray filling curving around the reniform spot. The posterior segment is crisp with medial black and lateral white components, strongly angled toward the base with a bend toward the outer margin on 1A+2A just above the posterior margin. The subterminal line is only evident as the transition from the paler gray and orange-tan subterminal area to the gray terminal area, forming a strong W-mark to the outer margin on the mid-wing on M3 and CuA1 and with a slight tooth toward the outer margin on 1A+2A above the posterior margin. The terminal line is thin, dark gray. The fringe is gray. The spots are very faint, absent or outlined in faint gray and filled with the adjacent color. The orbicular spot is elongate and horizontal. The reniform spot is weakly kidney-shaped. The claviform spot is absent, likely a component of the median black line described above. The hindwing is pale gray with slightly darker outer margin, thin dark gray terminal line, and light gray fringe. The head and thorax is powdery gray-tan to gray, sometimes with a faint dark stripe across the distal collar. The male antenna is filiform.

This species can be identified from other late summer and fall-flying desert moths by the angled outer forewing margin, washed out gray and orange color, black median line, black and white lower postmedial line, and dark gray lower terminal area that is separated from the rest of the terminal area by the W-mark of the subterminal line. It is most similar to Xylomoia indirecta, but this species is warmer brown in color, has better-defined spots and lines on the forewing, and has a black wedge in the posterior subterminal area that P. didonea lacks.

This is a relatively rare and sporadic species found in wetlands at low elevations east of the Cascades.  This includes marshes, seeps, and the edges of lakes.

Photedes didonea is found in the dry interior basins of our region. It has been found in Moses Coulee in the Columbia Basin, Washington, and at a few desert localities in southeastern Oregon.

This species is found in western North America, but appears to be rare across its range. It has been found in southern Alberta, Wyoming, Utah, Nevada, and eastern California outside of the Pacific Northwest.

No information is presently available regarding the larval biology of this species, but it probably bores into the stems of coarse marsh grasses (Poaceae).

The flight period of P. didonea is relatively short in late summer and early fall, usually from late August to mid-September in our area. It is nocturnal and comes to lights.