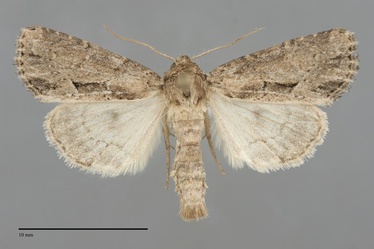 Xylomoia chagnoni is a small (FW length 12–13 mm), yellow tan or grayish tan moth that flies in a small portion of southeastern British Columbia and eastern Idaho during June and July. Its tan forewings have a slight gray tint, are lightest in the posterior median and subterminal areas, and have a thin black line across the posterior medial area. A suffusion of gray scales is darkest along the trailing margin basad to the antemedial line and opposite the cell and near the anal angle in the terminal area. A thin black bar spans the median area in the fold and is fused with a short dark segments of the adjoining lines. The lines are double, gray to black, but mostly incomplete. Short segments of the antemedial and postmedial lines in the fold are most prominent, along with a series of gray dots along the postmedial line. The antemedial line is zigzag, while the postmedial line is convex lateral near the anterior cell and then strongly oblique toward the wing base to the trailing margin. The subterminal line is pale, very faint. The terminal line black interrupted by the ground on the veins. The fringe is checkered tan and gray. The spots are very faintly and incompletely outlined and filled with the ground, barely evident in most specimens. The hindwing is light tan with a faint yellow sheen, slightly darker gray on the outer third. The discal spot and scalloped postmedian line are gray, ill defined. The terminal line is dark gray to black, darker than other hindwing markings except faint at the anterior and posterior margins. The head and thorax are gray tan like the forewing, with gray transverse stripes on the prothoracic collar. The male antenna is nearly filiform. The eye is round and smooth.

This moth is unlikely to be confused with other species in its limited Pacific Northwest range. It is most similar to Photedes didonea in size, color, and forewing pattern. However, P. didonea occurs in dry desert habitats and the ranges of these species do not overlap. Xylomoia chagnoni bears some resemblance to Xylomoia indirecta, a much more common and widespread moth in our region. Its forewing tends to be warmer reddish brown than in X. chagnoni and is more strongly patterned, clearly darker basal to the postmedian line. The terminal area of X. indirecta is mostly dark gray, unlike that of X. chagnoni which is tan with lighter gray limited to near the anal angle. Hypocoena inquinata is similar in size and general coloration and flies in wet meadow habitats. Its forewing is streaked longitudinally due to pale veins unlike that of X. chagnoni, and most specimens have at least a portion of the postmedial line visible as a black mark, not a faint series of dots.

The habitat of this moth is poorly known in the Pacific Northwest. It is found in damp meadows and marshes in eastern North America. The single Idaho record in our region is from the ecotone between dry brush steppe and a shrubby riparian area.

Xylomoia chagnoni has only been found in southeastern British Columbia near the border with the United States and recently in eastern Idaho north of Salmon. It might be more widespread in the eastern part of our region, especially in western Montana.

This moth occurs predominantly in eastern and central North America. Its range extends from Newfoundland to southern Ohio in the East and from central Saskatchewan to Colorado on the Great Plains.

The larva of X. chagnoni is a borer in the root shoots of reed canary grass (Phalaris arundinacea) (Forbes 1954).

Adults are on the wing during late June and the month of July in British Columbia. They are nocturnal and come to lights.