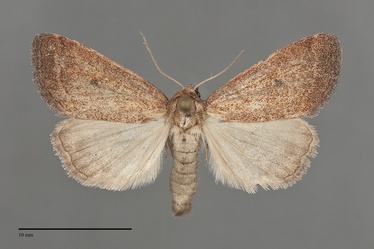 Photedes inops is a small moth (FW length 12–15 mm) that flies in southeastern British Columbia during late summer. It has a powdery, light pinkish- to reddish-gray forewing with reduced lines and dark gray in the lower reniform spot. The forewing is relatively broad with a slightly pointed apex. The color is powdery light reddish-brown, slightly darker along the costa and in the terminal area. The lines reduced, usually only the pale even subterminal line is present, preceded by an even darker shade. The antemedial and posterior postmedial lines are sometimes evident, thin and gray. The orbicular spot is a small circle or is absent. The reniform spot is faintly outlined in pale, but is prominent due to dark gray filling of the lower third and pale filling of the rest of the spot. The other markings are absent. The hindwing is pale grayish yellow with a slight pink and gray tint toward the outer margin. A thin terminal line is present at the base of the grayer fringe, often with a pink tint. The head and thorax match the forewing. The male antenna is filiform.

This species should only be expected in eastern British Columbia and adjacent Montana and Idaho. It can be recognized by its small size, reddish color, reduced markings, and gray spot in the lower reniform spot. It is unlikely to be confused with other moths in our area.

Photedes inops is found in wet meadows and marshes at low elevations with cordgrass, the larval foodplant.

This species has only been found in southeastern British Columbia where it has been collected by Dean Nicholson of Cranbrook.

Photedes inops is most common in the Great Plains and Midwest. The range extends to the Atlantic where it is found near the ocean from Connecticut to Nova Scotia.

The flight season of C. inops is late summer and fall, usually in August and September. It is nocturnal and comes to lights.