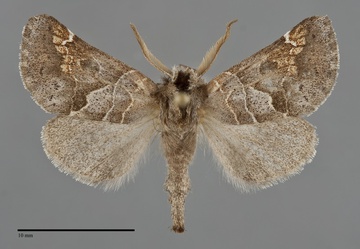 Clostera strigosa is a relatively small (FW length 13–14 mm) pale gray Clostera species with wavy forewing lines and yellow and orange color near the postmedial line.  It has only been found in British Columbia in our region.  As in the other Clostera species lines are pale and the postmedial line forms a white mark at the costa.  The adjacent wing is mottled red-brown and burnt orange.  The lines are undulating, including a transverse pale line that extends obliquely across the wing from the inner third of the costa to the outer third of the posterior margin.  The hindwing is gray.  The antennae are bipectinate and the head and anterior thorax are marked with brownish black.

This species can be told from Clostera "apicalis" (a complex composed of two species: C. apicalis and C. ornata) which also has an oblique line on the median forewing by the undulating shape of this line, straight in C. "apicalis".  Clostera strigosa is also our only Clostera with yellow or light orange scales along the subterminal line.

The larva is gray with black stripes and short, yellow scoli or tubercles. It is illustrated by Miller et al. (2018).

Clostera strigosa has been collected seldom in our region.  The few widely scattered records are from eastern British Columbia in the Rocky Mountain Trench and Peace River District, and at a single site in the northwestern province. It is most likely widespread in the northern part of British Columbia, an area that is poorly collected.

This Nearctic species occurs in boreal forest from the Atlantic Coast to British Columbia. It is found as far south as New York in the East.

The foodplant is given as quaking aspen (Populus tremuloides) in the Salicaceae as reported in Forbes (1948).

The flight period of C. strigosa is late spring and early summer.  The few Northwest specimens were collected from late May to mid-June.