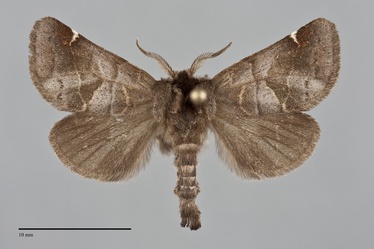 Clostera multnoma is a small (FW length 12–14 mm) mottled dark blue-gray Clostera that is widely distributed in the Northwest but is sporadic and rarely collected.  Like other members of the genus it has pale transverse lines, and the postmedial line forms a white mark at the costa that abuts a red-brown spot in the postmedial area.  The head and thorax are black and the rest of the body is dark gray.  The antennae are bipectinate and the tip of the male abdomen is tufted.

This species can be distinguished from our other gray Clostera species by the orientation of the pale lines in the median area.  The antemedial and median lines do not touch in C. multnoma.  In Clostera "apicalis" and Clostera strigosa the lines are partially fused producing and oblique line from the medial third of the costa to the distal third of the posterior margin. Until recently, C. multnoma was considered to be the same species as C. brucei, an eastern North American species not yet documented from our region.

The larva is finely mottled with white and gray and has two prominent rows of large yellow spots along each side, a short row of black spots on each side behind the head, and two black spots on top (one a few segments behind the head and the other toward the tip of the abdomen). It is depicted by Miller et al. (2018).

This species appears to be most common in association with quaking aspens.  It occurs rarely in conifer forests at low to middle elevations in the Northwest.

In the Pacific Northwest Clostera multnoma is found most commonly in central and southern British Columbia as well as in adjacent northern Washington and Idaho. Scattered records from west of the Cascades extend south to west-central Oregon. This moth has also been found in southeastern Idaho.

This moth occurs from central British Columbia to southern California, with a disjunct population occurring in NW Wyoming near the SE Idaho populations in our region.

Larvae of this species feed on woody plants in the family Salicaceae, and may prefer quaking aspen (Populus tremuloides).

Adults have been found from late spring to summer in our region, with most records from June and July.  The moth is nocturnal and comes to light.