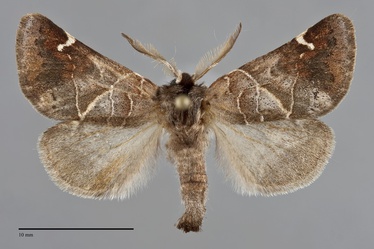 This is a complex of two species (Clostera apicalis and C. ornata) that occur in the region and that until recently were lumped together as a single species, Clostera apicalis. We need to re-examine specimens at the various regional collections before we can implement this taxonomic split and in the meantime will refer to them all as C. "apicalis". These are common, small- to medium-sized moths (FW length 12–16 mm) that fly in forests during the spring and summer. The forewing is slightly mottled medium to dark gray, and has with a pale lines and a white S-shaped mark on the distal costa.  The costal margin of the forewing is weakly concave (moreso in C. ornata than in true C. apicalis). The apex is bluntly rounded in true C. apicalis and a bit more pointed in C. ornata.  The forewing is mottled gray, darkest on the lateral side of the lines and on the apical distal third.  Dark brick-red is present in the anterior subterminal area, sometimes extending to the outer margin.  The transverse lines are pale yellowish off-white.  The basal line is off-set at the cubital vein. The antemedial line is smoothly excurved.  A pale line connects the mid-antemedial line to the postmedial line at the posterior margin which gives the appearance of a long oblique line across the entire  median wing.  The postmedial line is nearly parallel to the outer margin except at the costa where it forms a pure white S-shaped mark.  The discal spot is small, pale gray filled with darker gray.  The hindwings are light to medium gray, darker toward the outer margin, with a pale gray fringe.  The head and anterior thorax are dark brown, contrasting with the gray rest of the body.  The antennae are bipectinate and the tip of the male abdomen is tufted. Specimens of C. ornata tend to be a bit larger and paler than those of true C. apicalis.

Members of this species complex are the most widespread and common Clostera in the Pacific Northwest, and can be identified as belonging to this genus by the S-shaped white mark formed by the anterior postmedial line.  They can be distinguished from the other species in the genus by the straight oblique line across the median area.  This line is either absent or waved in the other species.  Clostera "apicalis" has more red near the forewing apex than any other Northwest Clostera.

Clostera "apicalis" is widely distributed in forests and riparian areas throughout the Pacific Northwest, extending north to the Peace River region of British Columbia.  It is least common in arid steppe environments, with relatively few records from the Columbia Basin, southeastern Oregon, and southern Idaho. Within this complex, C. ornata is less frequently found than true C. apicalis. Most C. ornata records in the region are from southern interior British Columbia, with scattered records elsewhere in the region. In contrast, true C. apicalis has been found widely in the region in southern British Columbia and throughout Washington, Oregon, and Idaho.

One of the two species in the Clostera "apicalis" complex, true C. apicalis, is the most widely distributed Clostera in North America.  It ranges from coast to coast, as far north as Montreal in the East, and at least as far south as the Mexico border. The other species in the complex, C. ornata, is restricted to western North America, where it occurs from northern British Columbia and southwestern Alberta to southern California.

Larvae in this complex are foodplant specialists on the Salicaceae, including both willows (Salix spp.) and cottonwoods (Populus spp.).

Adults are nocturnal and come readily to lights. Like other prominents (family Notodontidae), they do not feed as adults. Members of this species complex rest with the wings rolled around the abdomen, the tip of which is curved away from the substrate. They have a long flight season, with Pacific Northwest records from mid April through August. They are most common in mid summer.