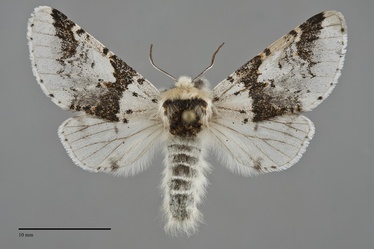 Furcula scolopendrina is our most common Furcula.  It is a medium-sized moth (FW length 15–19 mm) that flies in forests throughout most of our region from late spring through the summer. It has a white forewing marked with charcoal bands, lines, and spots, and a white hindwing.  The forewing appears to curve anteriorly due to a convex posterior margins.  It is nearly white, with dark gray across the wing in the basal median area and as a triangular patch in the anterior subterminal area.  The median band is variable in width but tends to be relatively narrow with an irregular outer margin, and it is sprinkled with raised metallic and yellow scales that visible to the naked eye as shiny emery-like particles when the moth is tilted under light.  The postmedial line is double or triple and strongly scalloped.  The other lines are evident as black dots on the veins.  The discal spot is absent or a short transverse line.  The hindwing is white with gray veins and is marked by a discal dot, weak submarginal band, and a terminal line of black dots on the veins.  The head and anterior thorax are pure white, while the posterior thorax is gray.  The male antenna is bipectinate and that of the female is simple.

This species can be identified by its white forewing marked with irregular dark gray bands with scattered metallic scales, scalloped lines, and black dots.  It is most likely to be confused with Furcula furcula and Furcula cinereoides, both widespread moths in our area.  Most individuals of these two species have gray anterior thoraxes, unlike the pure white one of F. scolopendrina.  Also, both are grayer with different color or shape of the dark median band.  The dark median band of F. furcula is wider with straighter margins than that of F. scolopendrina, and in F. cinereoides, it is gray, not black.  Furcula modesta, a rare species from British Columbia, has a yellow forewing, and the median band lacks the metallic scales of F. scolopendrina.

This species is common in moist forest and riparian habitats throughout the Pacific Northwest, including coastal rainforests, mixed hardwood forests west of the Cascades, high elevation montane conifer forests, and along creeks and rivers at low elevations east of the Cascades.

Furcula scolopendrina is widely distributed in forests throughout our region, including west of the Cascades.  It does not occur in xeric steppe habitats, although it occurs in the some of the mountains in the Basin and Range ecoregions.  The most northerly record found for this project is from Smithers in west-central British Columbia.

This species is widely distributed across the American West, ranging south to the northern New Mexico and the border with Mexico in Arizona and California.  In the East it is uncommon and occurs in a narrow north-south distribution from Quebec and Ontario south to Massachusetts and northern Illinois.  It is more common in the West than in the East.

This species is a foodplant specialist on Salicaceae, including both willows (Salix spp.) and cottonwoods (Populus spp.), but has also been reported feeding on birches (Betula spp.) in the Betulaceae.

Furcula scolopendrina has a very long flight season and might be multiple brooded.  Collection records extend from early April through August.