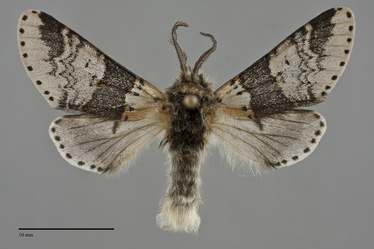 Furcula furcula is our darkest Furcula and tends to be slightly larger than our other species (FW length 17–21 mm.).  Both fore- and hindwings are a waxy light gray with a yellow tint, appearing nearly translucent like vellum paper.  The forewings are heavily marked with dark, hoary, gray lines and black spots.  The dark band across the median area is broad, with relatively straight margins in most individuals.  The postmedial line consists of three separate strongly scalloped lines; the other lines consist of strong black dots on the veins.  Patches of ochre are present near the transverse lines in some specimens.  The hindwings are marked with a discal spot, faint diffuse marginal band, dark veins, and terminal spots on the veins.  The anterior thorax is similar gray to the posterior thorax, occasionally lighter but not pure white.  The male antenna is bipectinate while that of the female is simple.

This species can be identified by its curved forewing shape, translucent gray color, and pattern of dark bands and spots.  It is most likely to be confused with the more common and widespread Furcula scolopendrina. In contrast to F. furcula  F. scolopendrina has a pure white head and anterior thorax, white wings, and narrower and a more irregular dark median area. Some F. furcula with strongly yellow tinted wings can resemble Furcula modesta, a rare northern species.  In contrast to F. furcula, F. modesta has less gray forewings and whiter hindwings, a yellow anterior thorax that is lighter than the posterior thorax, and often an hourglass-shaped median dark band with a median constriction.

North American populations of this Holarctic species were until recently considered to represent a subspecies of F. occidentalis, an eastern Northe American species that does not occur in our region.

This moth occurs in mixed forests, including boreal forest in British Columbia and a variety of forest types in western Washington.

Furcula furcula is found in forests of British Columbia, northern and western Washington, and northern Idaho.  A single northwest Oregon locality is from Clatsop County.

The range of this species is limited to western North America. Outside of our region, it is found in central Alberta with scattered records in the Rocky Mountains from southern Montana, Utah, Colorado, and New Mexico.

Willow (Salix spp.) in the Salicaceae is reported as the foodplant by Forbes (1948).

This species is single brooded and has been collected from late April through mid-August, with most records in late spring and early summer.  The adults do not feed.  It is nocturnal and comes to light.