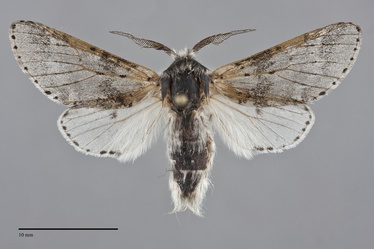 Furcula cinereoides is a medium-sized moth (FW length 16–19 mm) that flies in a variety of habitats from late spring through the summer. It has light gray wings and a washed-out pattern of slightly darker gray and black dots.  The forewing has a smooth convex outer margin, continuing to curve along the posterior margin.  It is nearly translucent medium gray.  The median band and subapical patch are only slightly darker gray than the ground color. The median dark area is dusted with paler scales and tends to be wavy in contour with a narrow "waist."  The lines are often faint, evident mostly at the costal margin and on the veins in most individuals, although they can be accentuated by black spots on the veins and bright ochre in some specimens.  A series of black spots forms the terminal line.  The fringe is light gray.  The white hindwings have dark gray discal spot, veins, and strong terminal spots on the veins. The entire thorax is silver-gray without a white collar.  The male antenna is strongly bipectinate and that of the female is simple.

This species is identified as a Furcula by the elongate wing shape, bipectinate antennae, and gray color with black dots at the end of the veins of both wings.  It is told from our other species by its washed-out pattern lacking strong dark elements and the gray rather than white or cream color. It is most likely to be confused with Furcula scolopendrina, a common species in our area, which is white and can have reduced black markings.  F. scolopendrina has a broad white anterior thorax unlike the dark anterior thorax of F. cinereoides. F. cinereoides was recently recognized as being a distinct species from F. cinerea, an eastern North American species not found in our area.

This species is widely distributed in riparian zones along creeks and rivers throughout the Pacific Northwest.  It is relatively uncommon west of the Cascades, but is more common east of the Cascades.

Furcula cinereoides occurs in most of the Pacific Northwest.  It is most common east of the Cascade Mountains, with many records from the east slope.  It is the only Furcula that is found in xeric steppe habitats, presumably feeding on willows in riparian areas.  Our records from west of the Cascades are from Oregon.  The most northerly records are from dry areas near Seton Lake in southwestern British Columbia.

This species is limited to western North America, where it occurs from southern British Columbia to southern California.

This species is a foodplant specialist on Salicaceae, including both willows (Salix spp.) and cottonwoods (Populus spp.).

Adults of F. cinereoides have a fairly long flight in the Pacific Northwest, with records from mid-April through August.  It is nocturnal and comes to light.  The adults do not feed.