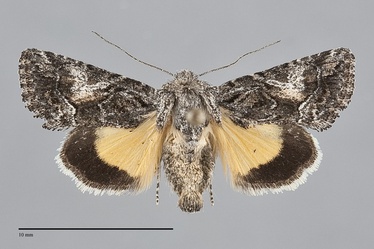 Pseudanarta crocea is a very small to small moth (FW length 9–11 mm) that flies in steppe and dry forests during the fall. It has a gray forewing with whitish spots and median area, and a black-banded, bright yellow hindwing. The forewing is mottled dark gray, lighter whitish gray and tan in the mid-median area, in the posterior subterminal area, and at the apex. The terminal area is dark gray except at the apex. A broad dark gray or black median bar is present in the fold, often bordered anteriorly by a thin stripe of light tan. A short curved black basal dash is present. The lines are black and gray, partially double. The antemedial line is filled with gray anteriorly and pale gray to white near the posterior margin, broadly excurved, undulating and drawn toward the base on the veins. The median line is gray, limited to the costa. The postmedial line is filled with gray near the costa and white elsewhere, strongest in the fold, is drawn toward the base on the costa, nearly straight angled toward the outer margin lateral to the reniform spot, and concave toward the base in the fold. The subterminal line is gray, often obscure or absent, preceded by small black spots in the subterminal area. The terminal line is dark gray. The fringe is weakly checkered dark gray. The orbicular spot is a very long slanted white oval, often fused to the reniform spot, filled with gray. The reniform spot is a whitish smudge, weakly kidney-shaped. The claviform spot is not evident. The hindwing is bright yellow with a well-defined black marginal band. The hindwing fringe is white with a dark gray base. The head and thorax are light to medium gray with dark margins on the posterior tegulae. The male antenna is beaded.

This small moth and the three other members of the genus are the only fall-moths with yellow and black hindwings except for a few species of Sympistis in the subfamily Oncocnemidini. Pseudanarta crocea is the only species with white-filled forewing spots and little tan or brown color on the forewing, at most a tan segment near the median bar. The most similar moth is Pseudanarta caeca which has a yellow-tan median area without white spots. Sympistis corusca has a gray forewing and is small, but it flies much earlier in the summer rather than in the fall. Sympistis mirificalis is brown-gray and lacks a long white orbicular spot.

This species is widely distributed in many types of open habitat throughout much of western North America. It is often abundant on open sagebrush steppe, in juniper woodlands, and in open ponderosa pine forests at low to middle elevations east of the Cascades.  It is even common on dry rangelands heavily disturbed by livestock grazing. It occurs in oak savanna and native prairies at low elevations west of the Cascades in Oregon, and in open meadows at high elevations along the summit of the Cascades and in the Rocky Mountain region.

Pseudanarta crocea is widespread east of the Coast and Cascade Ranges as far north as south-central British Columbia. It is common in the Columbia Basin, in southern Oregon, and on the Snake River Plain in southern Idaho. It is less common west of the Cascades where it is found in southwestern Oregon and in the Willamette Valley.

No information is presently available regarding larval foodplants of this species, but it is probably a specialist feeding on native bunchgrasses (Poaceae) based upon closely related species.

The flight period of P. crocea is the fall. It first appears in late August and flies to early October in the Pacific Northwest. It is nocturnal and comes to lights. Moths are often seen flitting about the yellow flowers of rabbitbrush (Ericameria nauseosus, Asteraceae) in the early evening.