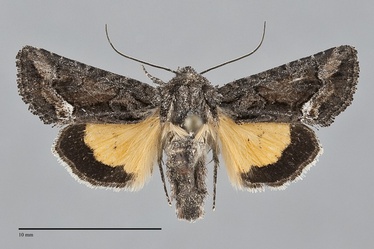 Pseudanarta flava is a very small to small moth (FW length 9–11 mm) that flies in steppe habitats during late summer and fall. It has a dark brown-gray forewing with a white posterior postmedian line, and a black-banded bright yellow hindwing. The forewing has a pointed apex and is dark gray-brown, warmer brown in the central median area anterior to a thick black bar in the fold. The anterior subterminal area and apex are slightly lighter, the posterior subterminal area is light brown with a black spot above 1A+2A, and the terminal area is blackish gray. A curved lack basal dash is present, and there is black suffusion on the posterior margin near the base. The basal and antemedial lines are thin black, double filled with the ground color. The basal line is evident on the costa. The antemedial line is angled toward the outer margin anterior to the fold and is deeply zigzagged posteriorly. The median line is gray, weak, limited to the costa. The postmedial line blends with the ground color at the costa and has black inner and white outer components elsewhere, the white often widening to a spot in the fold. The line is concave toward the base lateral to the reniform spot, oblique toward the base on the mid-wing, and turned at a right angle toward the trailing margin in the fold. The subterminal line is pale tan, thin, sinuous, only evident posterior to CuA1. The terminal line is black. The fringe is dark gray. The orbicular and reniform spots lack dark outlines and are filled with the gray-brown color, barely evident against the brown median area. The claviform spot is not evident. The hindwing is bright yellow with a well-defined slightly undulating black marginal band. The hindwing fringe is white with a ochre and dark gray base. The head and thorax are dark gray-brown. The male antenna is beaded.

This moth can be recognized by the combination of dark brown forewing with nearly obsolete spots, a white and black postmedial line, and yellow and black hindwing. It is most similar to Pseudanarta singula, a species that is restricted to southeastern Oregon in the Northwest. It has a darker postmedial line than P. flava and a lighter brown terminal area with black spots near the apex, not dark gray or black. Pseudanarta caeca has a yellow-tan median area and is blue-gray elsewhere on the forewing, and Pseudanarta crocea has white forewing spots. A few fall-flying Sympistis species are nearly as small as P. flava and have brown forewings and yellow and black hindwings. All of them have better-defined spots than P. flava.

This species is widely distributed throughout much of western North America in low-elevation open dry prairie and rangeland habitats.  In the Pacific Northwest, it is usually moderately common in sagebrush steppe. It appears to be more restricted to relatively undisturbed steppe and juniper woodlands than is P. crocea, avoiding heavily grazed rangelands.

Pseudanarta flava is widespread east of the Coast and Cascade Ranges as far north as south-central British Columbia. It is common in the Columbia Basin and in southeastern Oregon, and also occurs in southern Idaho.

This moth has a fairly large range in western North America. It occurs as far north as southern British Columbia and Alberta. The range extends south through the Rocky Mountains and western Great Plains to Colorado. It occurs across the Intermountain region to eastern and southern California and Baja California, Mexico.

This species appears to be a foodplant specialist feeding on native bunchgrasses (Poaceae).

The flight period of P. flava is the fall, usually beginning in late August and lasting until mid-October. It is nocturnal and comes to lights. The moths are very fond of the flowers of rabbitbrush (Ericameria nauseosus, Asteraceae) and are often found taking nectar at its flowers.