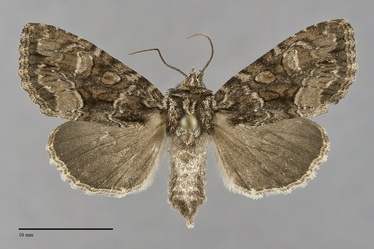 Platypolia mactata is a medium-sized moth (FW length 16–17 mm) that flies in British Columbia, north-eastern Washington, and the Idaho Panhandle during the fall. It has broad, olive-tinted gray-brown forewings with black basal and median dashes, large spots, and black dashes that cross the subterminal line distal to the cell. The forewing is broad with a scalloped outer margin. The color is mottled, darkest in the median area, and on the costa in the subterminal area. The terminal area is dark brown-gray with dark between the veins. The rest of the subterminal area is uniform lighter gray-tan with dark-spotted veins. A short forked basal dash and a diffuse median dash are present, and a similar mark is present along the base of the trailing margin. Long black wedges precede the subterminal line opposite the cell, and the longest cross the subterminal line to reach the outer margin. The basal, antemedial, and postmedial lines are dark brown-gray to black, double with tan filling. The basal and antemedial line are undulating; the latter is angled across the wing and sharply incurved on the posterior margin. The median line is black, diffuse, undulating and bent 90° at the lower reniform spot. The postmedial line is strongly toothed on the veins with dark and light spots on the veins at the tips of the teeth, sharply drawn basad on the costa, smoothly curved around the cell, strongly angled toward the base below M3, and turned toward the posterior margin in the fold. The segment through the fold is thicker than the rest of the line. The subterminal line is pale tan, diffuse and mildly irregular, with an offset below the apex and a slight lateral bulge on the mid-forewing. The terminal line is black. The fringe is slightly checkered gray-brown. The orbicular and reniform spots are partially outlined in black. The orbicular post is oval, filled with light brown and a dark ocellus. The reniform spot is weakly kidney-shaped, broad, outlined in black medially and by pale tan laterally, filled with brown and tan. The claviform spot is weak, barely evident near the base of the median bar. The hindwing is dark brownish gray, darkening toward the margin, with faint discal spot and postmedial line in some specimens. The hindwing fringe is white with a yellow and gray base. The head and thorax are hoary gray-brown with a black line across the distal collar and dark near the edges of the tegulae. The thorax is sculpted and has anterior tufts. The male antenna is biserrate.

This moth can be identified by its olive-gray color, black median dash, and large spots. It is unlikely to be confused with other species in our region. The other Platypolia species are dark gray rather than olive-brown.

This species is widely distributed across Canada in moist forests.

Platypolia mactata reaches the western limit of its range in the Northwest. It is found in much of British Columbia as well as in adjacent north-eastern Washington and northern Idaho.

This species is widely distributed in North America. It occurs throughout central and southern Alberta and across southern Canada to Nova Scotia. It is found south to Ohio and Maryland in the East, slightly further south to northern Georgia in the Appalachian Mountains.

The flight period of P. mactata is the fall, usually in September. It is nocturnal and comes to lights.